Brew or Die (A Java Jive Mystery #4) by Caroline Fardig 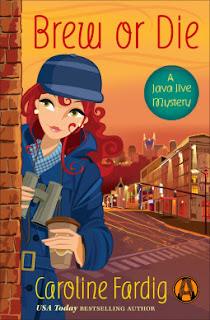 Brew or Die
(A Java Jive Mystery #4)
by Caroline Fardig

Inspired by her past sleuthing successes, Juliet Langley has officially joined the ranks of Nashville’s licensed private investigators. Her best friend, Pete Bennett, doesn’t worry that her detective work might interfere with her full-time job running his coffeehouse, Java Jive. He just wishes she would spend her free time rejoining the local music scene instead of tailing cheating spouses. But when one of Java Jive’s baristas, Shane, asks Juliet to look into the suspicious death of his fiancée, Pete encourages her to plow full steam ahead.

Since his fiancée died on the job, Shane suspects that her party-planning colleagues are up to something criminal—and will do anything to keep it quiet. After Juliet recruits Pete to go undercover with her at a wedding showcase, she discovers that white lace and black satin have a way of hiding big, fat secrets.

If that weren’t enough to fill her plate, her latest P.I. job has her crossing paths with her ex, Detective Ryder Hamilton. They’re barely on speaking terms, but to solve the case, they might have to cooperate. No matter where Juliet goes, she’s brewing up trouble.

This is the fourth book in the Java Jive Mystery series by Caroline Fardig.

Juliet has finally received her PI (private investigator) license much to her boss, Pete’s dismay. Since trouble seems to know where Juliet lives, it is only natural that all sorts of bad guys seem to be drawn to her. One of the guys who works with them at Java Jive has Juliet and Pete look into the death of his girlfriend. In between investigating, Juliet finally commits to furthering her relationship with Detective John Stafford. But her old flame Detective Ryder Hamilton is still watching over her even though he has become enemy number one to her.

I don’t want to give too much away since the journey through this is what makes it so good. I enjoy how indecisive Juliet is in her love life and her investigation. And just when she thinks she has set herself in the right direction, it all goes horribly wrong.

I am now reading the fifth book in the series and wonder if there will be other books showing up after that. I really like this universe Fardig has created! This is definitely a good cozy series to dig into if you want to read something that is outstanding.

I received this as an ARC (Advanced Reader Copy) in return for an honest review. I thank NetGalley, the publisher and the author for allowing me to read this title.
Posted by Toni at 12:18 PM