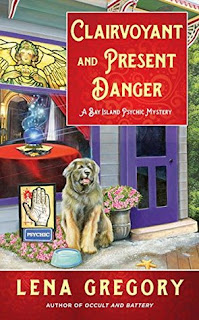 Goodreads synopsis:
A haunting vision reveals a ghostly grave in the latest Bay Island Psychic Mystery from the author of Occult and Battery.

Whoever said that dead men tell no tales has never met Cass Donnovan...

Cass has always relied on her abilities to guide her, but after communications with a ghost land her in the middle of a murder investigation, she has to wonder if her gifts are really more a curse.

Cass knows she is meant to help track down the killer--much to the chagrin of local law enforcement--when the apparition leads her to a dead body on the beach near her psychic shop, Mystical Musings. But the police are not the only ones who wish Cass would stick to reading palms. Someone is trying to scare her off, and it will take all her powers of premonition to catch the killer before Cass herself becomes the next victim...

This is the third book in the Bay Island Psychic mystery series by Lena Gregory.

Basic premise Cass Donovan owns a psychic shoppe but she doesn’t really think she is psychic. Then she sees the ghost of a woman who leads her and her dog to a dead body on the beach. Now Cass and her friend, Bee do a little sleuthing to find the killer. And then Cass realizes she may actually have some sort of psychic sense after all.

I am pretty sure the name Cass is in homage to the psychic beauty from Troy named Cassandra who had the gift of sight but her burden was that no one ever believed her warnings. This story has the twist that the person who doesn’t believe is Cass herself.

I am not sure why but the gay man with the name Bee just threw me off for some reason. But he was the perfect sidekick to Cass’s heroine. I think Stephanie is a pretty integral part of the book series but I don’t think she stood out as much as the others.

This book grabs you from the beginning with the ghost and then the painting of the ghost. You begin to wonder what is going on and the solution is just so far off you can’t seem to grasp it.. like a wisp of the incense Cass burns in her shop.

The story gets a bit muddled in the middle but then end just shines! I love how the group seance was a throwback to an Agatha Christie plot device where you get all the suspects in one room and weed out the true killer. Classic! Can’t wait to read the next book in the series.

If you love a good magical/paranormal/witchy cozy mystery, definitely check this one out. You won’t be disappointed.