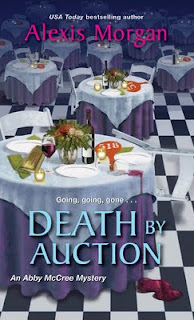 Goodreads synopsis:
Not only did Abby McCree inherit her aunt's house in Snowberry Creek, Washington, she inherited a handsome tenant and a whole lot of trouble . . .

It's hard to say no to Tripp Blackston. That's how Abby found herself on yet another committee, organizing a bachelors' auction to raise money for Tripp's veterans group. The former Special Forces soldier is mortified when Abby enlists him to be one of the prizes, but she has a covert plan to bid on him herself. Before she can, she's foiled by a sniper bid from a gorgeous stranger, who turns out to be Tripp's ex-wife, Valerie.

Still reeling from the shock that Tripp was married and wondering what his ex is suddenly doing in town, Abby goes looking to pay the auction's emcee, radio personality Bryce Cadigan. She finds him in the parking lot, dead in his car. Valerie appears to be the last one to have seen Bryce alive, so she's the cops' best bid for suspect. When she asks Tripp for help--and lodgings--it's Abby's turn to block by inviting Val to stay with her. But did she just open her home to a murderer?

This is the third book in the Abby McCree mystery series by Alexis Morgan.

Basic premise:  Abby sets up a Bachelor Auction at the request of her friend, Tripp. The master of ceremonies is not such s nice guy and he ends up dead in the parking lot right after the event and Abby finds his body.

Abby McCree is a complex character. She has taken over a large house after the death of her Aunt Sybil who was pretty notorious in her day. Her Aunt had a tenant named Tripp and a large Mastiff named Zeke. These two were pretty much forced upon her in the beginning (book one). Now Abby is starting to have feelings for Tripp and wants to bid for him at the Bachelor Auction. But Tripp’s ex-wife, Val, shows up and offers a whopping $5,000 bid for the luxury of dancing with him at the event. When Abby is looking later to give Brandon, the master of ceremonies, his check, she sees Valerie and the MC have heated words and go outside to talk. Not long later Brandon is found dead by Abby still in his car from a fast acting poison.

This book is easy to follow and the mystery whodunit part was well done. But I don’t completely understand the dynamic between Abby and Tripp. I can’t decide if they like each other or just tolerate each other. It would be nice to have a second male love interest available in town to shake things up a bit. I wonder how old Chief Gage is Tripp is still in college and taking classes but that does not necessarily mean he is young. So it is difficult to ferret out an age here. Maybe a secondary character romance would be nice. Abby seems like a singular person who doesn’t really have a lot of interaction with people. Even though she organized this bachelor event, the sense of real community is missing. I wonder why Abby’s quilt guild isn’t mentioned  more. I think they were more of a presence in book one.

The ex wife was brought in as a foil to Abby and her true intention and details about her were left till the bitter end and it made it harder to guess who was and wasn’t a suspect. I wish Abby had been a bit more nosey. I think we need something added to shake up this series. It is a good read. I enjoyed it but it felt a little on the bland side. I do, however, look forward to reading the other books in this series.

I received this as an ARC (Advanced Reader Copy) in return for an honest review. I thank NetGalley, the publisher and the author for allowing me to read this title.
Posted by Toni at 10:22 AM