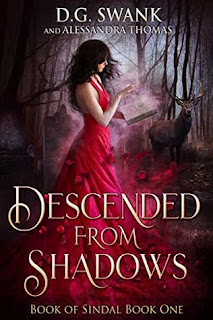 Goodreads synopsis:
For centuries, Phoebe Whelan’s family of witches and mages has guarded the Book of Sindal, a tome filled with spells so evil it could destroy the world. After their parents’ death six years ago, it’s up to Phoebe and her older and younger sisters—Rowan and Celeste—to guard the book with their magic and their supernaturally fortified land. But Celeste’s expression magic is wild and untamed, and without their mother’s calming influence, Celeste is slowly going mad.

When the book—and Celeste—go missing, the Valarian Small Council believes Celeste stole the deadly book of spells. When they assign Captain Brandon Cassidy, the head of the Magical Protective Force and Phoebe’s former high school crush, to look for book, and things get a whole lot more complicated

Soon it becomes apparent a dark force has taken the book, which will only open with the blood of all three Whelans. The Dark Set has the strongest sister, now it needs the blood of the other two. Brandon’s mission quickly changes to include her protection, but Phoebe’s goal has remained the same—find the book and her sister, prove Celeste’s innocence, and let nothing get in her way, including her reawakened feelings for the man at her side.

This is the first book in the Book of Sindal series by DG Swank.

Basic premise:  Three girls are responsible for the caring of an evil magical tome. They each have their part in conjuring the protection. Celeste has been acting odd lately and when she goes to do her part of the ritual, she disappears and the sisters cannot connection to her via their special bond.

This is the first book in the series so they had a lot of world world building to do. I thought it was all super interesting. The magical elements are a great add on but the story itself is just spot on. This book featured Phoebe Whelan and we get to know a lot more about her power and her connection to a young mage who is now on the Protection Force, Brandon Cassidy. The book pretty much sticks with these two. But there are times when we get glimpses into the story of the other two sisters.

Totally enjoyed this. Definitely finishing the series. I bought this via my Kindle and the book was a reasonable price for such a great series.

If you are looking for a good magical mystery, definitely check this one out.
Posted by Toni at 2:55 PM