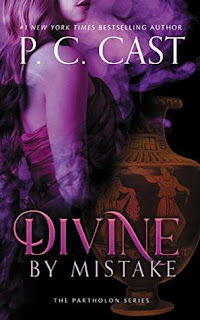 Surrounded by old folks and even older artifacts, Shannon never expects to find something that shocks her down to her very core: an ancient vase, complete with a beautiful painting of a goddess that looks just like her. And just as she’s stealing away with her seriously suspicious purchase, she’s magically thrown into the world of Partholon, where not only has she taken the place of Rhiannon, Goddess Incarnate and Epona’s Chosen, but she’s due to be married to a surly (but oh-so-handsome) High Shaman centaur, ClanFintan.

But serving as Epona’s Chosen isn’t just luxury baths and buff horse-guys. A dark power grows in the wastelands to the north, and Rhiannon will need much more than just the favor of Epona to protect the land—and the man—she’s grown to love.

This is the first book in the Partholon series by P.C.Cast.

I had no idea how big this book was until I was halfway through it. This book first came out in 2001. I am not sure if this was as hyped as her House of Night series but this sure does deserve the hype. PC Cast is just an excellent writer. She takes us on an epic journey into another time which is certainly why this had to be a 700 page tome. And that is only book one.

This story follows Shannon. She is an Oklahoma school teacher who gets thrust back in time to take the place of Rhiannon. In many cultures Rhiannon is a goddess all to her own, but here she is the beloved of Epona, the horse goddess. Rhiannon enchanted a vase that would seek out Shannon and allow them to switch places. Apparently, the goddess Epona isn’t stupid and allowed her once loyal servant to do the switcheroo since in reality, Shannon was really the beloved Epona wanted. Beloved here just means that Shannon was the vessel she chose to work her magic through. Not sure why a goddess couldn’t do that on her own since she was so powerful.

This is part love story, part modern day epic fairy tale. Throw the gods/goddesses into the mix and you have a must read book. Loved the story of the centaur ClanFintan and Shannon and how they found and accepted each other’s love. Just totally my cup of tea all around.