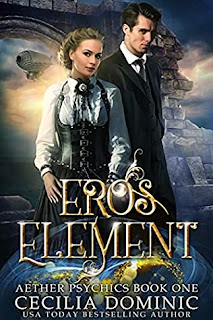 Two misfit scientists in a race against time…

Iris McTavish always wanted to follow in her father's footsteps. But when his sudden death leaves her household on the brink of ruin, she may have to choose an unwanted marriage over her passion of archaeology. To save her house and prove her worth, she embarks on a mysterious and dangerous expedition…

Edward Bailey's strict scientific code holds back his anxiety and heartbreak. With his professorship and his department in danger, however, he realizes he'll need to find the secret to turning unstable aether into limitless power to keep himself afloat. And for once, Edward can't do it alone...

As Iris and Edward seek out hidden clues, they're hunted by clockwork spies and a shadowy society. During their dash across Europe, the misfit explorers must work together to crack a worldwide energy crisis and discover the truth if they want to stay alive.

Eros Element is the thrilling first book in Aether Psychics, a series of Victorian-era steampunk adventures. If you like puzzling mysteries, incredible inventions, and a touch of magic, then you'll love Cecilia Dominic's high-spirited series.

Basic premise: Iris has to go on a quest with a band of men in order to secure her father’s home after his death left them on the brink of ruin.

This took a bit to get into since it is a steampunk Victorian universe with a bunch of new characters to get to know. I could easily resonate with Iris McTavish and her uncanny ability to touch objects and glean their inner truths.

The story started off with a bang when one of her father’s colleagues tries to force her to marry him in order for him to secure her father’s papers and notebooks. This felt like the Mummy meets Steampunk France but instead of Egyptian mythology it was Greek.

Edward Bailey was a bit of a dunderhead at times. But he grew on me as the story unfolded. You really do have to get used to all the customs of the late 1800’s. For example, Iris wasn’t allowed to be in the room with a man without a chaperone. Iris was rather forward thinking for a woman of that time.

I have to say I am intrigued to know what will happen next. I think the next book will feature another couple. I guess I would categorize this as a Steampunk Action Adventure Romance. I am definitely intrigued enough to buy book two in the series.

If you love a good historical romance, definitely check this one out.
Posted by Toni at 11:34 AM