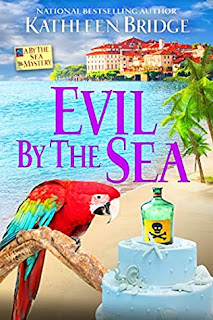 Goodreads synopsis:
Liz Holt is bewitched, bothered, and bewildered when a wicked killer objects to a wiccan wedding...

Island life can get pretty weird. Wiccan weddings, psychic brides, mermaid parades, eccentric parrots...Novelist Liz Holt has gotten used to it since moving back to the barrier island of Melbourne Beach, Florida, and once again working in her family's hotel and emporium, the Indialantic by the Sea. But one thing she'll never get used to is murder.

Groom-to-be and leader of the Sunshine Wiccan Society, white warlock Julian Rhodes is poisoned at his rehearsal dinner on the hotel's sightseeing cruiser. His psychic bride, Dorian Starwood, never saw it coming. An old friend of Liz's great-aunt Amelia, the celebrity psychic engages Liz to find out who intended to kill her intended. With her Macaw, Barnacle Bob, squawking "Pop Goes the Weasel" at Dorian's pet ferret, and the streets teeming with mermaids in tails, Liz has got to wade through the weirdness and cast a wide net for the killer—before she's the next one to sleep with the fishes...

Basic premise: There is going to be a Wiccan wedding at the Indialantic and before the ceremony can even start, the groom ends up dead.

I thought this was pretty good. Auntie Amelia is constantly giving us mid-century television icon images for everyone in sight when she isn’t telling us about her star status back in the day when she was a sought after tv bit part actress.

The mystery here is probably more complex than the previous books. I was able to focus more on the whodunit action since I was already used to the ravings of Liz’s aunt and other things that seemed to knock the story off track. Loved the whole wiccan storyline and how it played out. I felt like this was much easier to grasp than the second book in the series which I read right before this one. (I read book three last year sometime.)

The cast grows on you and once you know what to expect, the story is easier to follow. Definitely will keep up with the series even if certain aspects kind of turn you off after awhile. Auntie Amelia can be overkill sometimes.

I received this as an ARC (Advanced Reader Copy) in return for an honest review. I thank NetGalley, the publisher and the author for allowing me to read this title.
Posted by Toni at 11:18 AM