From Cinderella to Countess (Harlequin Historical) by Annie Burrows 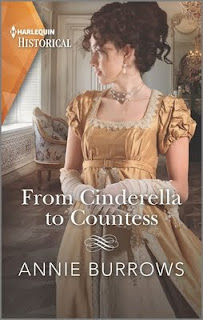 From Cinderella to Countess
(Harlequin Historical)
by Annie Burrows

Amazon synopsis:
From Cinderella in the shadows

To countess in the spotlight?

Lady’s companion Eleanor Mitcham longs to escape her unhappy life. The only bright spot is her employer’s nephew, Lord Lavenham, but she’s been told she’s too lowly to speak to him! When he suggests they teach his interfering aunt a lesson by marrying, Eleanor assumes he’s joking, especially given his cynical view of marriage! Perhaps fleeing is her only hope for a fresh start. Why, then, is Lord Lavenham hot on her heels?

This is a book in the Harlequin Historical line by Annie Burrows.

I thought this was a good story and I really enjoyed it but it felt like it took the long way home as far as the plot went. Some of the sections were longer than I wanted them to be. The wrap up near the end where the couple finally got together were rather agonizing moments as we pondered their ultimate fate.

I wish Eleanor had been able to find a way to open her uncle’s eyes to see what it really means to take care of his family. The fact that he was a pastor and was clueless was not lost on me.

The whole sections with the Duchess were indeed odd but interesing. A bit long winded for my taste but nice. I was hoping that when the Duke finally appeared there would be more drama around him. But he was rather strangely silent. I wanted the author to dig into his character more. Maybe there is a future book awaiting him. Seems like a great candidate.

Overall, the story was pleasing. It did tend to go round and round so much it made me dizzy with relief when it was finally over. I think an epilogue would have been a nice touch here so we could see where their relationship would go a bit into the future.

If you want to read a good historical romance, definitely check this one out. You won’t be disappointed.

I received this as an ARC (Advanced Reader Copy) in return for an honest review. I thank NetGalley, the publisher and the author for allowing me to read this title.
Posted by Toni at 12:40 PM