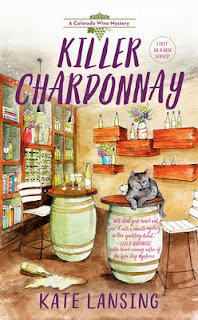 Parker Valentine has always dreamed of opening her own winery in her hometown of Boulder, Colorado. But she gets more than she bargained for when a food and wine critic unexpectedly shows up at Vino Valentine on opening day. A negative review could be fatal for her business, and not only does he seem to hate her chardonnay, he also collapses and dies shortly after drinking it.

Although Parker hoped that the attendees would put a cork in it, soon her winery is at the center of a social media firestorm. With #killerchardonnay trending online, Parker's business is in danger of closing, and she has no choice but to investigate the murder herself.

To restore her reputation, catch a killer, and keep her struggling business open, Parker needs only one thing: some good proof.

This is the first book in the A Colorado Wine Mystery series by Kate Lansing.

I know nothing about wine or alcohol. I don’t even drink. But I still was glued to my seat by this Chardonnay Mystery.

Basic premise: Parker Valentine is starting her first business as a wine maker. On the opening day of her winery, a food and wine critic makes an appearance and ends up dead in the middle of the festivities. Parker needs to prove she had nothing to do with his death if she wants her business to survive.

Since this is a new series, everyone is a suspect here. None of the main cast are really a reality yet. So it was hard going for me. I was so suspicious of Reid, the flirty wanna be restaurant owner/chef. My chips were all in the court of Detective Eli as far as the romance aspect went. So I guess I was just hoping for a love connection there. Maybe there will be hope in the future.

I think the mystery of this was just so spot on! So many suspects. Then when the kid she wants to question also ends up dead…. wow! Drama! Detective Eli lost a bit of respect for Parker in that instance, I think. I am sure it had all of us scratching our heads in wonder of whodunit. I was completely clueless and so shocked when the true killer was revealed. Great plotting and triumphant red herrings.

This is definitely a series I want to continue with. I am all in now! Can’t wait for book two!

I received this as an ARC (Advanced Reader Copy) in return for an honest review. I thank NetGalley, the publisher and the author for allowing me to read this title.
Posted by Toni at 7:19 AM