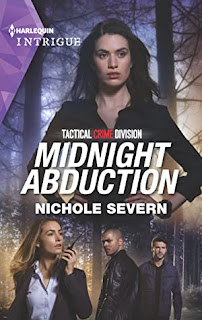 no case is left cold.

When Benning Reeves’s twins are kidnapped, the frantic father knows who can help: the Tactical Crime Division and Ana Ramirez. Even though Ana once shattered Benning’s heart, the special agent is the only one he can trust. But Ana is still tormented by the unresolved case that brought them together years before—a case somehow entangled with Benning’s children. It’s up to the TCD and Ana to discover why…before it’s too late.

This is the third book in the Tactical Crime Division series in the Harlequin Intrigue imprint by Nichole Severn.

Basic premise: Benning Reeves lost Ava Rameriez seven years ago when she chose her job over him. Now he needs her expertise. He has twins. One girl and one boy. The mission that tore them apart is surfacing again. Benning had discovered a skull on one of his work sites. He hid it after the discovery but someone doesn't want that artifact coming out in the open again. To retialiate, the man kidnapped his son. Ava decides to assist him but seeing him again is bringing up too many memories.

The action scenes are pretty vicious here. I am not sure how they are even walking by the halfway mark. The story is action-packed. It never stops long enough for the two of them to reacquaint themselves.

I like how the thing that broke them up is what is bringing them back together again in the end. But I almost think the action is too over the top. It takes away from the emotional story that the author has built. I am not saying it is written badly. The scenes are solid and prove what a formidable force the bad guy is. I just think it is a bit over the top.

This feels like it should be a more team focused story. I missed seeing more connection to the Tactical Unit. That would make the whole plotline more cohesive.

I never usually say this but I think this story should have been longer so we can have more of every aspect.

If you are looking for a good romantic suspense book, definitely check this one out.