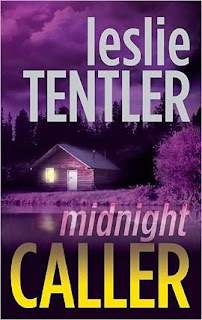 Goodreads synopsis:
"I don't plan to kill you... unless, of course, you force me to."

Late-night radio show psychologist Rain Sommers is used to the crazies who call in to rage from the back alleys of the French Quarter and the shadows of the bayou. But one caller's chilling obsession with her and her long-ago murdered mother - an iconic singer beloved among the city's Goth community - has even the jaded Rain running scared as a sadistic serial killer known as the Vampire prowls New Orleans.

FBI agent Trevor Rivette is convinced her midnight caller and the killer are one and the same. As it becomes disturbingly clear that the Vampire has a sick bloodlust only Rain can satisfy, she allows Trevor to get closer and closer. But he soon discovers that his secretive past and troubled present are intertwined - and that he may die trying to keep Rain's fate out of a madman's control.

This is the first book in the Chasing Evil Trilogy by Leslie Tentler.

Wow! I was on the edge of my seat the entire time reading this. I am so glad I picked this out of my Kindle library. I have the other two books in this series as well and plan to read those soon also. I chose this book for two reasons. One, the Reading Rush Readathon had a prompt to read a book with a house on the cover. Two, I have my own wheel of TBR prompts over at WheelDecide and it asked me to pick a book with a purple cover. This fit both of those prompts perfectly. Oh, and I just thought of a third reason I wanted to read this. It reminded me of the old Midnight Caller television show with Gary Cole that always intrigued me.

Basic premise: Rain Sommers is a late night radio show psychologist whose parents were murdered when she was a kid. Now a caller named Dante has vampiristic tendencies and wants Rain for his next snack. Plus, he seems fixated on the death of Rain’s mother who was quite a celebrity back in the day. FBI Agent Trevor Rivette has come to New Orleans to find a serial killer. And he is listening one night to Rain’s radio show when Dante reveals his tendencies to her. Now he is certain that the serial killer and Dante are one in the same and now his focus is on Rain.

I loved the setting in this and I was in awe at how the author built her characters with so much backstory. You could feel all the pain as Trevor returned to his hometown. He knew he was missing the joy of family but it was also his relationship with his father that kept him away for so long. Hard to face those ghosts of the past.

Rain was hiding in her own way. She had built a comfortable life out of the public eye but that didn’t keep a mad man from finding her and wanting to make her his.

Loved this so much. Can’t wait for book two. I wish there were stories for some of these minor characters because I would certainly read a full book about any of them, especially the siblings of Trevor.

If you love a good romantic suspense, definitely check this one out. You won’t be disappointed.
Posted by Toni at 8:03 AM