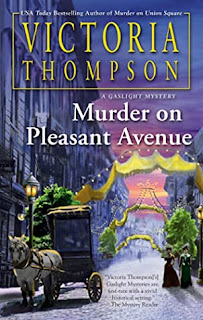 Goodreads synopsis:
When Gino Donatelli is accused of a brutal murder, beloved sleuths Sarah and Frank Malloy have to catch a killer who is out to destroy their innocent friend's life in the latest installment of the national bestselling Gaslight mysteries.

A victim is found, brutally murdered and the police are certain they've caught the killer. Their only suspect: Gino Donatelli.

Frank and Sarah know Gino is innocent but the police have a one-track mind. Once Frank struck it rich and left their ranks taking Gino with him, there has been a simmering resentment in the department. And now, someone has pulled out all the stops to make it look like Gino is the only one who could have committed the crime.

With the clock ticking and evidence mounting against their friend, Sarah and Frank will try to unravel a treacherous plot before Gino is sent up the river for good.

This is the twenty-third book in the Gaslight Mystery series by Victoria Thompson.

This was well-written and it captured my interest right from the beginning. I don’t think I have ever read a historical cozy from this author but I will definitely pick up another in this series! Wow, this is the twenty-third book in the series! How amazing!

Basic premise: A man is murdered and Gino is found hovering over the body just as the police enter the scene. We know it has to be a set up, but who would go to such lengths to make another look so curiously guilty?

I love how the author weaved the tale and even the women here who are usually so reserved during such a historical piece were rather forward thinking, to my mind.

I am not sure who is supposed to be the POV character since this feels like a mystery with a bunch of people in the lead position. In this I felt like Sarah and Frank were more front burner, but the mystery itself had Maeve and Gino in the number one position. I am okay with either of these as the lead characters. Heck, maybe this is always a group effort sort of like when the Scooby gang goes in and investigates. Loving the whole vibe of this story.

I felt like this was so easy to read and get into. The flow was amazing and the character development high. I felt like I was watching this on tv and not just reading a book. This would be a great series to adapt to television with so many turn of the century mystery shows on television right now. Make sure and check this series out! I am surely going to start from the beginning and see what I have already missed.

If you love a good historical cozy mystery, definitely check this one out. You won’t be disappointed.

I received this as an ARC (Advanced Reader Copy) in return for an honest review. I thank NetGalley, the publisher and the author for allowing me to read this title.
Posted by Toni at 9:13 AM