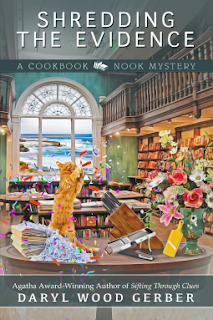 Paperback, 230 pages
Expected publication: April 21st 2020 by Beyond the Page

Goodreads synopsis:
The Agatha Award–winning author of Sifting Through Clues returns to the Cookbook Nook, where a combative food reporter gets her just deserts . . .

The denizens of Crystal Cove are salivating over the upcoming Food Bowl Week, when local chefs offer some of their best and most imaginative creations in bite-size portions all over town. Bookstore proprietor Jenna Hart is hungry to sample as many of the delicacies as she can, but when she stumbles onto the dead body of a local food reporter and learns that her best friend’s husband is the primary suspect, she’ll have to summon the appetite for a side dish of sleuthing to prove his innocence.

Jenna knows the ambitious and aggressive reporter, who was strangled at a fitness center with her shredded restaurant reviews scattered around her, left behind a long list of potential suspects. As she begins piecing together the scant clues, she uncovers illicit ties between the victim and a local newspaper owner, a spurned would-be lover, and a host of disgruntled restaurant owners not a bit torn up by the critical reporter’s demise. And with a solution so close she can almost taste it, Jenna turns up the heat on the culprit, realizing too late that she’s the next course on the murderer’s menu . . .
Includes tasty recipes!

This is the ninth book in the Cookbook Nook mystery series by Daryl Wood Gerber.

Basic premise: During Food Bowl Week in Crystal Cove, Jenna Hart, owner of a local cookbook store, finds the body of a dead food reporter and her best friend’s husband is the main suspect.

I was surprised how open police chief Cinnamon was in this book. She was pretty hard-nosed in the last book. I think that now she is pregnant, she is finding more common ground with the citizens of Crystal Cove.

This series is really growing on me and I look forward to starting from the beginning and getting to know all the characters better. Even with a plethora of cast members, this book is easy to follow. The whodunit aspect was fun to follow. Every clue led to a revelation and I really liked how it all wrapped up. This felt like a transition book to me. I think the author is looking for new things to season the storyline and is cutting some characters and adding new flavor to the overall mix. Definitely liking this new direction.

This is only the second book I have read in the series and it will not be my last. I think a marathon is in order. This series is one to watch!