Six Cloves Under (A Garlic Farm Mystery #1) by Gin Jones 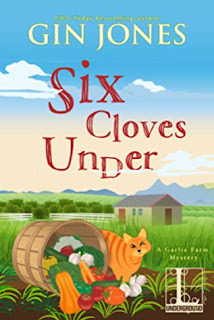 Six Cloves Under
(A Garlic Farm Mystery #1)
by Gin Jones

Goodreads synopsis:
App developer Mabel Skinner is about to discover something rotten on her late aunt's garlic farm—and it's not the compost heap . . .

Mabel doesn't know a stinkin' thing about garlic farming. She knows how to develop an app and how to code. But when her aunt, Peggy Skinner, dies suddenly, Mabel inherits her Stinkin' Stuff Farm in western Massachusetts. She arrives during peak harvest time—with three days to bring in the entire crop before rain can destroy it.

But Mabel has an even bigger problem: she suspects her aunt's “accidental death” was murder. As she digs for both garlic and clues, Mabel must contend with a mysterious crop thief, a rival garlic grower her aunt was suing, and a farmer who was after Aunt Peggy's green-thumb secret. It's up to Mabel to crack the code on a killer, before she joins the garlic bulbs six cloves under . . .

This is the first book in the A Garlic Farm Mystery by Gin Jones.

I never thought a garlic centered storyline would be so thrilling!

Mabel is an internet savvy app designer. She has come to town to deal with all the details after her Aunt Peggy’s untimely death. Aunt Peggy was a garlic farmer with the best garlic on the East Coast. And someone wants Peggy’s award-winning crop for themselves. Everyone is a suspect since Mabel doesn’t know anyone and her radar for people who would take advantage of her has always been a bit wonky.

I am totally digging this series. Not sure why all the farming stories have been my thing lately since I have the blackest green thumb there is. Plus I am allergic to nearly everything on a farm: hay, dirt, dust, grass, trees, horses, cats, dogs, etc.

I could resonate with Mabel’s experience here. I would be just as baffled as she was. It is one thing to get thrust into the middle of a harvest season when you don’t know the ropes, but to be also stressed about whether or not your aunt was murdered… that took this to a whole new level for me.

In a first book in a series, you get a lot of characters thrown at you in a short period of time. We will get to know them all better at some point since I am sure this series will just grow by leaps and bounds. It was unputdownable for me. Plus, I felt like there was this spark between Charlie contractor and Mabel. It may have been my imagination but I could sense the heat from a hookup that was bound to happen someday.

The only thing this story lacked for me was a good love interest. Plus it was new and different to have a police officer who was not in that role. Heck, I even suspected both him and his wife at one point in the story. The whodunit part of this was amazing. I wish there had been a few more clues at the beginning pointing me toward the killer just to get that “ah-ha” moment when the villain is revealed.

I totally can’t wait for the next book in the series!