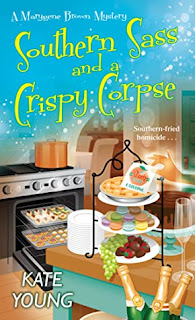 Goodreads synopsis:
On Georgia’s picturesque Peach Cove Island, a killer is serving up a two-for-one special . . .

After their mama's passing, Marygene Brown returned to Peach Cove Island to help her sister Jena Lynn run the family diner, renowned for its homemade peach desserts. But Mama is never too far away—her sassy spirit haunts the island, and more specifically Marygene. Lately Mama has been warning her that the dead will seek her out to solve their murders, an idea Marygene is far from peachy keen on.

But that prophecy appears to be coming true when she goes skinny-dipping off the island and swims right into a woman's charred corpse floating in the waves. And when Marygene and her brother Sam come upon a second burned body in a wine cellar at an event they're catering, it appears they have a double homicide on their hands. It soon turns out the victims have more in common than their charred remains, and Marygene will need to double down to find a killer who has no aversion to playing with fire. Good thing Mama has her back . . .

This is the second book in the Marygene Brown mystery series by Kate Young.

Basic premise: Marygene gets caught skinny dipping by one of her  more senior neighbors and runs smack dab into a burned dead body. Then later when she has recovered some and is working on catering a shindig, she finds another body in the basement of the house … which is also a crispy corpse!

I really enjoyed this book. It has the ghost of Marygene’s mother running around giving her clues here and there. Plus she decides to call it quits with her police officer boyfriend who is not only slacking on the job but getting it on with another gal. A new officer to town, Javier starts out as a foil for Marygene but very quickly grows on us and we know that there will be more of a relationship in future books.

Marygene really deals with a lot in this book. She has finally gotten everything how she wanted it. Then her relationship went to crap, her house got burned down with the perfect kitchen she had always dreamed of.

This is the first book I have read in this series and I do plan to read further on. The mystery was just so spot on that I really have to read book one next! This is a great series to follow for sure!