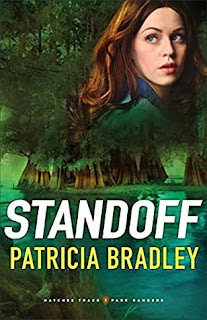 Goodreads synopsis:
The Natchez Trace National Parkway stretches 444 miles from Nashville to Natchez, the oldest town on the Mississippi River. It's the perfect road for a relaxed pleasure drive. Unfortunately for park ranger Luke Fereday, lately it's being used to move drugs. Sent to Natchez to infiltrate the organization at the center of the drug ring, Luke arrives too late to a stakeout and discovers the body of his friend, park ranger John Danvers.

John's daughter Brooke is determined to investigate her father's murder, but things are more complicated than they first appear, and Brooke soon finds herself the target of a killer who will do anything to silence her. Luke will have his hands full keeping her safe. But who's going to keep him safe when he realizes he's falling--hard--for the daughter of the man he failed to save?

Award-winning author Patricia Bradley introduces you to a new series set in the sultry South that will have you wiping your brow and looking over your shoulder.

This is the first book in the Natchez Trace Park Rangers series by Patricia Bradley.

Basic premise: A veteran park ranger is killed after coming upon a drug buy. His daughter wants answers and begins looking into his death. Luke Fereday came upon the body of his friend but he is undercover and can’t reveal what he knows. A photographer also had a view of the scene and has photos that incriminate the guilty party. Then he also ends up dead.

I almost didn’t think these two would ever get together. Brooke lives next door to Luke’s grandmother. Luke was asked by Brooke’s father to go undercover and now that he’s dead, Luke has to be really careful who he trusts… for his grandmother’s sake and Brooke’s as well.

Brooke had to fight to get herself in with the Natchez Rangers and now that she has reached her goal, she is determined to find her father’s killer even more. It was real hard to figure out who the bad guy was since there were so many viable suspects around.

This is definitely a series I want to continue to follow.

If you are looking for a good romantic suspense book, definitely check this one out.

I received this as an ARC (Advanced Reader Copy) in return for an honest review. I thank NetGalley, the publisher and the author for allowing me to read this title.
Posted by Toni at 1:07 PM