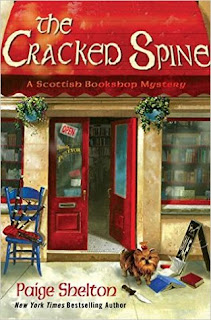 Goodreads synopsis:
In need of a good adventure, Delaney Nichols takes the leap and moves to Edinburgh, Scotland to start a job at The Cracked Spine. She doesn't know much about what she's gotten herself into, other than that the work sounds exciting, and that her new boss, Edwin MacAlister, has given her the opportunity of a lifetime. Edwin has promised that she'll be working with "a desk that has seen the likes of kings and queens, paupers and princes," and Delaney can't wait to get started.

When she arrives, she meets her new Scottish family; also working at the Cracked Spine are Rosie, perpetually wrapped in scarves, and who always has tiny dog Hector in tow; Hamlet, a nineteen-year-old thespian with a colored past and bright future; and Edwin, who is just as enigmatic and mysterious as Delaney expected. An unexpected bonus is Tom the bartender from across the street, with his piercing eyes, and a rolling brogue -- and it doesn't hurt that he looks awfully good in a kilt.

But before she can settle into her new life, a precious artifact -- a previously undiscovered First Folio of Shakespeare's plays -- goes missing, and Edwin's sister is murdered, seemingly in connection to the missing folio. Delaney decides to do some sleuthing of her own, to find out just what the real story is behind the priceless folio, and how it's connected to the tragic death, all without getting harmed herself.

This is the first book in the Scottish Bookshop mystery series by Paige Shelton.

Basic premise: Delaney Nichols takes a job at a bookshop in Scotland. Before she even gets the chance to meet all her new co-workers, they discover that a rare folio by Shakespeare has gone missing and the last person to see it was her boss’s deadbeat sister, who turns up murdered.

I thought this was a good book but Edwin, Delaney’s boss, was stupid. I mean, why give your rare Shakespeare folio to your sister who is a drug addict and then wonder why it went missing. We all knew what happened to it. The ending of this was a little bit of a let down too since Edwin was so nonchalant about what happened to the folio. It felt like all this build up was for nothing.

I did enjoy the mystery whodunit element and the flirtation between Delaney and bartender/pub owner Tom was a fun and needed addition. The characters in this did standout particularly well and it was easy to keep straight who was who.

Since this is book one in a series, it had a lot to do. It had to introduce us to a ton of people, recurring or not plus throw us into a mystery we’d be willing to suspend disbelief enough to follow. I think it did both particularly well. Although, some of the motivations were a little iffy for me. I don’t really understand why Delaney felt like she had to move all the way to Scotland for a job in a bookstore not to mention my previous reservations about Edwin and the folio.

I am intrigued enough to want to continue with the series and see what unfolds further. And I think that is mainly due to Tom and Delaney’s budding relationship.

I received this as an ARC (Advanced Reader Copy) in return for an honest review. I thank NetGalley, the publisher and the author for allowing me to read this title.
Posted by Toni at 7:15 AM