The Irishman's Christmas Gamble (Wager of Hearts #2.5) by Nancy Herkness 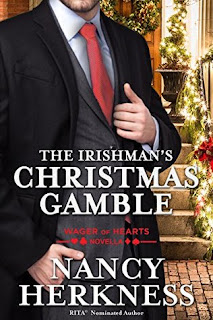 The Irishman's Christmas Gamble
(Wager of Hearts #2.5)
by Nancy Herkness

Goodreads synopsis:
Having risen out of the slums of Dublin to build a multinational gourmet chocolate business, Frances “Frankie” Hogan has settled for being respected, envied, and rich beyond belief…but never happy. She has built a secure home within the walls of the exclusive Bellwether Club, a place she established for self-made billionaires like herself. She’s convinced that nothing can ruffle the calm of her well-ordered, though lonely, world—until her past, in the form of Liam Keller, shows up at her door.

European soccer sensation Liam Keller has carried a torch for Frankie since their years together in their hard-scrabble Irish neighborhood. Frankie was the one who fed his dreams and pushed him to reach for the elite level of his sport, even as she kept him at arm’s length. Their ambitions launched them in different directions, but now Liam finds himself in New York as a coach to an up-and-coming professional American soccer team.

Liam’s feelings for Frankie have never faded, but their years apart have brought complications, including a secret that could drive Frankie away. Only a Christmas miracle can help Liam convince the woman he adores to finally gamble on love.

This is a novella (book 2.5) in the Wager of Hearts series by Nancy Herkness.

Even though this was a quick read, I felt like it was handled just as gracefully as the longer books. Truthfully, I would have read an entire book about these two. The words just sang off the page.

Basic premise: Three men walk into an exclusive bar (a CEO, an Athlete and an Author) for billionaires and make a wager on love when the have given up on the concept. This book features Frankie Hogan the owner of the Bellwether Club who keeps the bets of these three gentlemen safe.

Frankie has this sort of untouchable air to her that makes you think nothing can touch her or ruffle her very aloof feathers. But there is a man out there who can get under her skin. Liam is from the same town in Dublin as Frankie.  They were slum kids who managed to break themselves out of their awful poverty. Now the two are thrown together. Frankie doesn’t want to revisit the past but Liam has other ideas.

Great novella. I read this as part of the Owls Readathon. The prompt for Potions was to read a book under 150 pages.

If you love a good contemporary romance with a bit of suspense, definitely check this one out. You won’t be disappointed.
Posted by Toni at 9:13 AM