The Midnight Wife by L.G. Davis 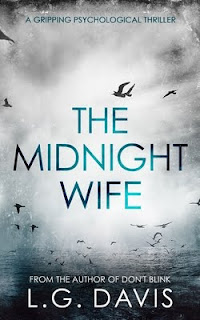 The Midnight Wife
by L.G. Davis

Goodreads synopsis:
She has a new life and a loving husband, but will her secrets ruin everything?
Kelsey Bloom has been living a perfect lie, hiding in plain sight from the past that broke her.

Everything is going according to plan. She has made herself at home in the small town of Sanlow, Montana, and her life seems perfect from the outside...

... until she's attacked by someone who claims to know her secrets.

The wounds are deep and the consequences will last a lifetime, but she can't tell anyone what happened to her, not even her husband. One word and her cover will be blown.

While she struggles to recover from the trauma, her attacker is found dead in the lake close to where the attack happened.

She was the last person to see him alive.

As Kelsey tries to understand exactly what happened that fateful night, she makes a shocking discovery. She's a pawn in a deadly game that could end with her death or the loss of her freedom.

Is she strong enough to fight back, or is it game over?

I have to admit that this book was a little bit over the top for me. It is a psychological thriller that seems very straight forward on the onset. Kelsey Bloom, the perfect wife to Jared, is raped by one of her husband’s friends. In her struggle to free herself she hits him with a rock and runs off. The next day he is dead and Kelsey thinks she has killed him. Then she starts getting text messages from the dead man.

I don’t want to give too much away but I thought this story went a bit too far with the everyone is an enemy and everyone’s past is not what it seems, even the main character. It would have been nice to know the main character’s past just to make it all seem a bit more plausible as to why the sh*t hit the fan so thoroughly in Kelsey’s life.

The story did keep me interested enough to keep on reading although I was rolling my eyes at every turn at the over the top way the book presented itself. For a bit I thought i was in more evil version of Stepford. Considering how interconnected everyone was in this story I am surprised it was resolved so fast at the end.

Good premise but I thought it went too far on may points. I am not sure if this is a series but will look forward to reading other books by LG Davis.
Posted by Toni at 9:25 AM