The Sister-in-Law by Sue Watson 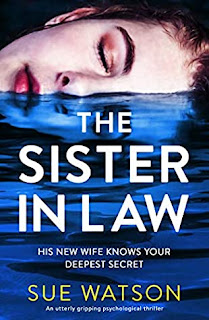 The Sister-in-Law
by Sue Watson

Goodreads synopsis:
‘You don’t think Jamie and I have secrets, do you? No, we tell each other everything.’ She smiled. ‘Including your dirty little secret. So, thinking about it, maybe it’s time to start being nice to me?’

THE WIFE: Clare is ready for a break. It’s been a tough year and now she wants to put her feet up. Arriving at the Italian villa for their summer holiday, she decides it’s high time her husband and his family did some of the work. After all, her husband owes her…

THE HUSBAND: Even though Dan had his head turned by someone else, he’s realised the error of his ways. He’s here now, and he says it’s for keeps. Clare can trust him, can’t she? At least he’ll have his brother there, to keep him in line…

THE BROTHER: Jamie is the prodigal child, back in the family fold again, after years of travelling abroad. But when he gets to the villa, he’s not alone. He’s brought a wife, someone none of them have met before.

THE SISTER-IN-LAW: Ella is everything Clare isn’t. Glamorous. Young. Influential. But she knows a secret about Clare. Something that has the power to break the whole family apart.

And there’s someone who will do whatever it takes to make sure that this deep secret never comes to the surface.

An utterly unputdownable, gripping, twisty psychological thriller perfect for fans of Before I Go To Sleep, The Girl on the Train and Date Night.

Sue Watson has knocked it out of the park, yet again!

I totally thought I had this one figured out and then when the killer is revealed… I was floored! I started out listening to this on my Kindle but I had to switch to reading because it so disturbed me. I mean, this stuff could happen in real life and that is what is scariest of all. Clare handled it all so much better than I would have.

The main character was keeping a secret from the readers from the very beginning which if we had known the circumstances, I think we would have had a better idea what the heck was going on. I am sure that was done purposefully but it was still a shock when we discover what Clare’s secret was.

Unputdowanable for sure! Disturbing on a very personal level. Loved the story but had to read it with one eye closed so the shock wouldn’t be so awful.

If you love a good mystery/thriller, definitely check this one out. You won’t be disappointed.