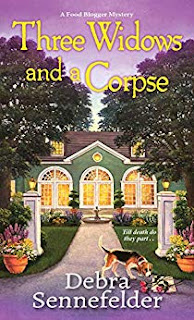 Between developing her food blog, Hope at Home, and choosing low-cal recipes for a feature in Cooking Now! magazine, Hope has a full plate. Still, she’s never too busy to compete in a Jefferson, Connecticut, tradition—the town’s annual scavenger hunt.

But as she races with her team to check off the next item, Hope discovers a grisly surprise—the body of shady real estate developer Lionel Whitcomb, shot in a parking lot. His wife Elaine, who’s also in the hunt, gasps and nearly faints. But two other women on the scene cry out that their husband is dead.

It turns out this louse of a spouse was more than a little lax in legally divorcing his former wives. Did one of them put a bullet in the bigamist? Number one suspect and number three wife Elaine begs Hope to investigate. Now Hope is on a new kind of hunt—for a cold-hearted killer and triple widow-maker . . .

This is the third book in the Food Blogger Mystery series by Debra Sennefelder.

Basic premise: Hope stumbles upon a dead body while in the middle of a town scavenger hunt event. Then after the man (Lionel) ends up dead, it is revealed that he has not one wife but THREE wives! Busy guy! Hope is warned early on to keep her nose out of the investigation since her boyfriend, Ethan is on the police force but of course, she doesn’t listen and that puts her in danger… over and over.

I love the whole food blogger thing. I think after the recipes at the end, there should be tips on how to create a successful blog. And maybe even have a blog online that we could turn to for recipe ideas. That would be fun and interactive for the readers.

The storyline was a bit convoluted but sometimes it is hard to have a straight forward murder investigation with three wives as suspects! It took me awhile to get into the whodunit but when I did, the story just flew! I will definitely be picking up other books by Sennefelder! Totally digging the food blogger sleuth!

I received this as an ARC (Advanced Reader Copy) in return for an honest review. I thank NetGalley, the publisher and the author for allowing me to read this title.
Posted by Toni at 2:54 PM