Why Me? Chimeras, Conundrums and Dead Goldfish (#1) by Charlotte Stuart 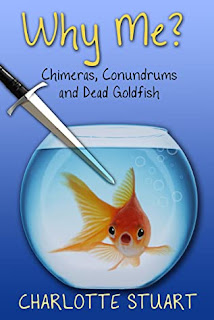 Why Me?
Chimeras, Conundrums and Dead Goldfish (#1)
by Charlotte Stuart

Goodreads synopsis:
A brilliant and controversial biotech scientist from Seattle is about to announce a discovery that will potentially make his company a fortune and save tens of thousands of lives. On a secret trip to Scotland he disappears, along with his cutting edge research.

Bryn Baczek, a Seattle consultant, is vacationing in Scotland, hiking alone in a downpour, plagued by a swarm of midges. She discovers a body at the bottom of a ravine, but before she can return with the Mountain Rescue Team, the body disappears.

Bryn becomes a target when several unscrupulous groups assume she ended up with the laptop containing the scientist's research. She eludes her pursuers and is saved from becoming the murderer's second victim by her cantankerous and predictable cat.

Basic premise: Bryn is a consultant on vacation in Scotland. She stumbles upon the dead body of a scientist who is later found missing when she calls in the authorities. Upon arriving home, she does a bit of investigating into who the man was and what would warrant killing him. Her inquiries are noticed by the men who killed him and thus her life is suddenly in jeopardy.

The plot of this was quite intriguing. Although, I could not buy that some bad guys would fly all the way from Scotland to Seattle to take care of Bryn after her discovery of the dead body.

It took me while to really get into this. It is only book one so there should probably be a bit of a media kit’s worth of intel about who Bryn is and what she is all about. I never quite understood her connection to Logan who seems like he will be a recurring character if this is to be a series.

I felt like this book needed a bit more meat to it. It flew by quickly but I didn’t feel a good connection to anyone. I think the Interpol guy would make a good recurring character but I didn’t get a good feeling about who he was. And Detective Ben has to be my favorite character in the mix.

I think book two will show us more about who Bryn is and what this series will be all about. Really digging what I read but with the shaky beginning and the skimpy character info, I couldn’t give it a higher rating. I do think this book deserves a better title that describes what it is all about. Vacation with Death comes to mind but I am sure there is something much more eloquent out there that will help sell this title better.

Looking forward to the next book in the series, for sure!

I received this as a gift from the author for an honest review.
Posted by Toni at 10:56 AM