Windy City Dragon (The Treasure of Paragon #2) by Genevieve Jack 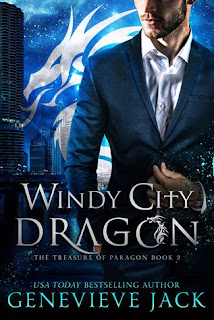 Windy City Dragon
(The Treasure of Paragon #2)
by Genevieve Jack

Goodreads synopsis:
Chicago: the Windy City, where something dark lurks just below the surface.

For decades he’s fought to be human…

It’s been a long time since Tobias spread his wings. The exiled dragon prince has worked hard to blend into the human world and practice his love for healing as a pediatric cardiologist. But when magic proves the only way to save a beloved child, he’s tempted to reengage with his past.

She awakens the monster within…

As a vampire-human hybrid, Sabrina is used to being different from the rest of her community. But all vampires need to feed. The night she chooses Tobias as her next meal, everything changes. He’s far more than he seems, and if she doesn’t protect his secret, it could cost him his life.

It takes a monster to know a monster…

One kiss thrusts Tobias into the dark underground world of Chicago’s vampires, where his dragon nature is his only hope of protecting Sabrina. But Sabrina knows the only way to keep him safe is to push him away.

This is the second book in the Treasure of Paragon series by Genevieve Jack.

I read the first book in this series and was just blown away by it. That put Genevieve Jack on my radar. I picked up book two since I naturally thought I would love it too. This book did not disappoint.

We don’t get a completely new cast here since the two main characters from book one play a significant role here. I enjoyed getting to see Tobias and how different he was from his brother, Gabriel. Tobias's love interest was a compelling vampire/human hybrid. It kinda gave me a bit of the True Blood vibe when it came to the vampire community but the plot is so original.

Sabrina feeds off of Tobias tries her brain washing charms on him but it doesn't work and thus they are introduced to each other as otherworldly creatures. I liked the dichotomy of being healers and warriors all at the same time. It made for not only a fast read but an interesting one.

This series just keeps getting better and better. It should be a tv series for sure!

If you love a good contemporary romance, definitely check this one out. You won’t be disappointed.
Posted by Toni at 2:46 PM