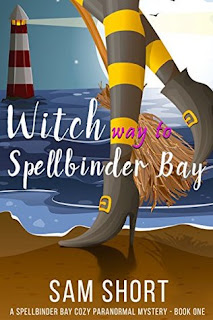 Goodreads synopsis:
Would you drop everything and move to a town with a peculiar name, because an odd little man made you a strange offer?

Millie Thorn did, and she could never have guessed what mysteries and revelations were awaiting her in the magical town of Spellbinder Bay.

After witnessing a murder on her first day in the bay, Millie is cast into a world she never knew existed – a world of magic and the paranormal, and a world where it’s seemingly normal to have a conversation with a cockatiel named Reuben.

Learning she is a witch becomes relatively simple to accept after discovering what other paranormal creatures populate the town, and with ever more mysterious clues about her life coming to light, it’s not just a murder she must solve. She must discover who she is, and why she feels like she’s been to the town before. Is it just déjà vu? Millie isn’t so sure.

With talk of another dimension known as The Chaos, and with an unlikely board of directors running the local school – there’s a lot for Millie to learn, and should she decide to stay in town – a lot for her to accept, too.

Did Millie make the correct decision when she moved to the bay? Only time will tell.

This is the first book in the Spellbinder Bay series by Sam Short.

Basic premise: Millie Thorn’s life changes forever after she loses her job and is thrown out of her apartment in the city. So when a little strange man gives her a thousand dollars and a train ticket to Spellbinder Bay, she can’t say no since she has no where else to go. Upon arriving she meets quite a lot of unusual characters, one of which is her next door neighbor who lives in a lighthouse. After she leaves, she sees what looks like someone throwing the lighthouse keeper off the top of the lighthouse. And the craziness just continues from there.

This is sort of a coming of age story even though Millie is a little old for that. Her magical heritage was kept from her for her entire life. And now her presence is needed in town or the town’s magical gateway just might leach out into the real world permanently.

I enjoyed meeting all the characters like the vampire biker, her cockatiel familiar Reuben plus the non-magical Detective and his witch daughter. This is definitely a series I want to continue on with. I am so intrigued. I wish the Detective was closer to her age because a love triangle between her, the detective and the vampire would be right up my alley!

If you love a good paranormal, magical cozy mystery, definitely check this one out. You won’t be disappointed.
Posted by Toni at 9:40 AM