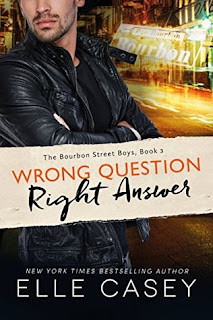 Goodreads synopsis:
As a member of the Bourbon Street Boys private security firm, Antoinette “Toni” Delacourte is one strong woman, but despite her reputation for being tough as nails, she is haunted by her past mistakes. Now they’re catching up to her, and throwing her for a loop.

Ten years ago, Toni kissed Lucky, her brother’s best friend. Worried it would break apart the group she’d come to see as family, she walked away—straight into the arms of Charlie, and an abusive relationship.

For the past decade she’s tried to keep her feelings for Lucky platonic—he’s her friend, her colleague, and he’s got his own past to deal with. Free of Charlie but unable to shake his memory, Toni finds herself feeling vulnerable and unable to deny her attraction to Lucky any longer.

She’s always thought that kiss was her first mistake, but now she’s wondering whether the real mistake was running away.

This is the third book in the Bourbon Street Boys series by Elle Casey.

I thought this was a pretty good story but I didn’t totally connect with Toni. I wasn’t sure if she would ever open up and Lucky was the same way. It was hard to like either of them with so many secrets. But when the point came and they start to realize they truly need each other, this book became great.

I don’t remember Oz’s girlfriend being so annoying in their book. May and Toni were probably as far apart in dispositions as people could get. Maybe it was that gap that made May seem so silly and air headed. When you paired her against Toni, it was a real extreme in emotional responses.

I thought for sure I had read two books in this series, but somehow I skipped over book two. Definitely going to go back and finish the series. This is a series that grows on you and you fall in love with everyone, quirks and all.

If you are looking for a good romantic suspense, definitely check this one out.
Posted by Toni at 8:08 AM