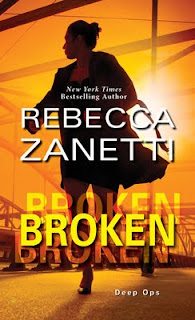 Goodreads synopsis:
Dangerous: Former Navy SEAL Clarence Wolfe's unit was taken out with a land mine. Injured and devastated, he hasn't been quite right since. Worse, the tragedy was no accident. All Wolfe wants now is to take down the man responsible. In the meantime, he's good with being the muscle for the Deep Ops team--and leading a steamy no-strings-attached personal life. Until one intriguing woman changes everything . . .
Determined: Reporter Dana Mulberry is on a mission to avenge the death of a fellow journalist. She's finally hot on a trail--right to a sex club--where she runs into . . . Wolfe? It seems both their leads have led to the same spot. To keep from blowing their covers, they'll have to at least pretend to have a little fun. Trouble is, they genuinely like each other. And that's way too risky for Wolfe, especially when, to his surprise, Dana agrees . . .
Complicated: Drawn to each other in ways they can't understand, Wolfe and Dana keep it professional--until they're shot at one night. And when their adventures land them both at the heart of corruption in D.C.--and at odds in their missions--they'll have to dig deeper than ever to succeed in their quests--and with each other . . .

This is the third book in the Deep Ops series by Rebecca Zanetti.

I am pretty sure Wolfe is the same guy that was a secondary character in PIVOT, a short story collection where Zanetti was a featured author. So, I started this book out with a good sense of who he was. Wolfe has this humorous thing that is sort of a gimmick for his character. He loves lattes with whipped cream and sprinkles. It is kinda funny that this intense and determined man loves this froo-froo drink. Not to mention This hilarious dog named Roscoe who keeps getting drunk and destroying all the ladies purses and shoes.

This book has all the action and covert things you would expect in a romantic suspense story. Plus, the growing relationship between Wolfe and Dana seems so real. Sometimes you feel like you need to turn away because you are peeking too closely into their lives.

There are a couple of different missions going on in this book but Zanetti does a great job of keeping it all straight for us. The plot is fast moving and never lets up. Even the sex scenes don't distract from the action too much.

I also loved how even the secondary characters had flaws and were imperfect. Angus will definitely get his own book, I am sure. And Jethro, the British professor, would make a great book as well. The characters in this are so well crafted. I am impressed.

Even though this centers around the Deep Ops team, the female lead still shines. She is so bull headed and stubborn it is no wonder she is such a good journalist. I am happy she stood her ground and didn't become a damsel in distress. We need strong women in novels for people to look up to and model.

Overall, it was one wonderful read!

If you love romantic suspense, definitely check this one out!

I received this as an ARC (Advanced Reader Copy) in return for an honest review. I thank the author, publisher and NetGalley for allowing me to read this title.
Posted by Toni at 4:45 PM