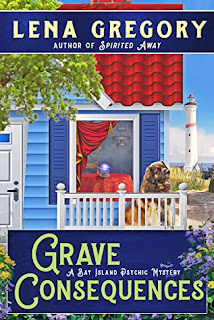 by
Lena Gregory
Expected publication: May 21st 2020 by Beyond the Page

Cass Donovan is reminded that you can’t believe everything you hear, especially when it comes from the dead . . .When stories begin circulating of a centuries-old ghost haunting the Bay Island lighthouse, Cass is caught up in mystical happenings of her own, with countless voices from the beyond all clamoring for her attention with dire warnings. But before she has a chance to learn whether there’s a connection between the rumored ghost and her restless visitors, the lighthouse keeper mysteriously falls to his death, and Cass’s reputation for communing with the dead lands her right in the middle of the police investigation.Cass knows the victim was no saint, as he made little effort to hide his philandering ways from his wife or anyone else, and often acted out with no thought for the feelings of others. But had he finally gone too far, or were there more menacing motives behind his murder? As Cass begins building a list of suspects, including the man’s supposedly grieving wife and a mysterious new woman in town, she also turns her ear to those otherworldly voices, hoping for a clue. And as she begins to close in on the culprit, she realizes too late that if she’s not careful, she’ll soon be communicating with the dead in person .

This is the fifth book in the Bay Island Mystery series by Lena Gregory.

As each book unfolds, we see that Cass is more and more comfortable with her psychic powers. In this title, she is learning to focus and block out certain dead people when she is trying to concentrate. She only realizes this is possible when she sees another lady do it and Cass wants to learn more.

The mystery here is pretty entertaining and I get a kick out of Bee and all of Cass's friends who hover around her so much. The gal might learn a bit more if they would leave her to her own devices more. We start out the book wondering if the person that fell from the lighthouse fell or was pushed to his death.

The characters are all a real hoot and I still have trouble seeing "Bee" as a guy. Not sure why. But he is definitely a character that grows on you. And you don't doubt his devotion to Cass.

One great series with paranormal elements.

I received this as an ARC (Advanced Reader Copy) in return for an honest review. I thank NetGalley, the publisher and the author for allowing me to read this title.
Posted by Toni at 7:03 AM