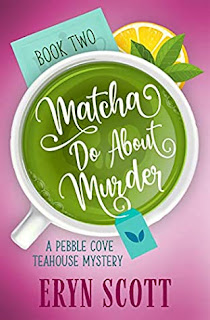 When a local man drops dead after drinking a matcha tea latte, Rosemary Woodmere suspects foul play. As a witness to the murder, she's called in for questioning.

At the station she meets a new ghost and learns the town's police force has a dark past when it comes to covering up murder. She might be off the hook, but can she let the case go when she fears the police might be repeating history?

To make things even more difficult, Rosemary's life with ghosts is getting complicated. While she searches for the truth about how Asher died, Rosemary attempts to help a local spirit encountering her own difficulties with her death. And while a little ghostly help might give Rosemary a leg up in this case, will it be enough when she comes face to face with the real killer?

This is the second book in the A Pebble Cove Teahouse mystery series by Eryn Scott.

There is a throughline from the previous book that manifests in this one. It is concerning Asher and his quest to have Rosie find out what happened to him in death. Apparently, ghosts don’t really remember their death day too well. And when Rosie uncovers a truth she doesn’t want to reveal to her friend, she asks her mother to investigate further.

The whodunit is surrounding a man who dies in the competing tearoom run by Jolene. I like the compromise the two come up with in this book in order to make their businesses successful.

Asher does a lot of disappearances in this book too which makes me sad since he is definitely my favorite character in the series. But I understand his absences.

I can’t wait until the next book comes out.  Definitely a great new series I suggest you check out! I am obsessed with it.

If you love a good cozy mystery, definitely check this one out.
Posted by Toni at 12:16 PM