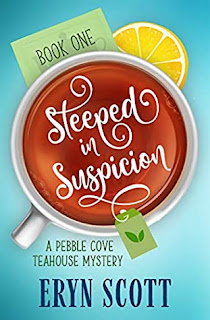 Goodreads synopsis:
Pebble Cove is not the sleepy coastal town Rosemary remembers from her childhood. Ghosts are everywhere, and only she can see them.

When Rosemary Woodmere inherits her estranged grandmother's Victorian teahouse, she didn't expect to also inherit a ghost named Asher from the 1920s.

Things get weirder for Rosemary.

Her grandma was supposedly murdered.
A body has washed up on the beach and the police suspect her in the man's murder.
She's trying to navigate her newfound ability to talk to ghosts.
And she doesn't even know the first thing about tea.

Rosemary's experience as a librarian hasn't prepared her to solve a murder, but everyone around her is steeped in suspicion and she has to find the truth before someone else ends up dead.

This is the first book in the A Pebble Cove Teahouse mystery series by Eryn Scott.

I stumbled upon this book as a Kindle recommendation. I am always on the lookout for a new series to follow and discovered that this book rang all my bells.

I totally resonated with Rosemary “Rosie” Woodmere. She had lost her grandmother and had been estranged from her for years. She was only in Pebble Cove since her grandmother had left her the house and teashop in her will. It was the appearance of Asher, a ghost from the 1920’s, who really made this book sing for me. There are long stretches when he is away from the scene as Rosie does her investigating but when he is with her, the book is so much better. I almost wish there was a way to make him a real boy so she could love him. That is the only sad part about this book. You can tell the two have a connection, but they can never do anything more than talk with each other.

Definitely a great new series I suggest you check out! I am obsessed with it.

If you love a good cozy mystery, definitely check this one out.
Posted by Toni at 11:35 AM