The Poe Consequence by Keith Steinbaum 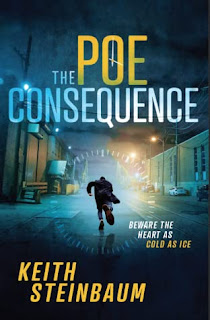 The Poe Consequence
by Keith Steinbaum

Goodreads synopsis:
In a section of Los Angeles near Dodger Stadium, two rival gangs rule the streets.
For the Alvarado Street Diablos, it’s been a year since the murder of one of their
closest members at the hands of their sworn enemy, the North Rampart Lobos.
A drive-by killing in his honor is planned, but things go wrong and an innocent
bystander is the victim. Several hours later the one who pulled the trigger suffers a horrifying death, caused by something never before seen in its uniqueness. Many more such cases follow, but all of them involving only these two gangs among the hundreds throughout the city. And each death occurs at the same time of day.

The exact same time of day.

What can these two enemies do to survive against an unstoppable power intent
on vengeance and their mutual destruction? How is a gang-hating young boy’s urgent attempt to save the life of a gang member tied into preventing a loved one’s soul from eternal darkness? And what does a mysterious psychic’s prophecy conveyed earlier in New Orleans have to do with all of this?

Exploring the emotions of despair, hope, and redemption that often define our humanity, The Poe Consequence integrates social and ethnic divisions through acts of fate and supernatural horror for the reader to observe and imagine.

The majority of this book features gangs and things that are going on with gangs. That part of the book didn’t interest me at all. So, I am probably not the best to appreciate a book like this. There was a cool Edgar Allen Poe connection which I didn’t completely understand. But the concept was one I hadn’t really seen in a book before.

When the Warren goes to see the psychic tarot lady, you don’t really realize what an amazing feat that is until his twin brother Kevin visits her near the end. Was I the only person who didn’t realize Warren and Kevin were twins. When that is brought up near the end, I was floored.

This book is about a man who is taking vengeance on gangs in order to put things right. A lot of Poe works are accessed in this story and it makes it a fascinating read. Bur it just wasn’t my cup of tea. That being said, this was a good book. It is heart warming and sincere. I felt something coming out of it. My heart was fuller.

Sometimes you just need to take a book for what it is and leave those niggling tidbits on the cutting room floor that don’t resonate with you. Definitely check this out if you have read a previous Steinbaum book.
Posted by Toni at 2:56 PM