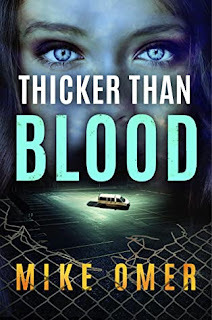 A murderer who drinks his victim’s blood? FBI profiler Zoe Bentley and Agent Tatum Gray thought they’d seen it all, but this young woman’s barbaric murder is especially hard to stomach.

They didn’t expect to work this case. But vampirism aside, the murderer’s MO is identical to that of Rod Glover—the serial killer who’s been pursuing Zoe since childhood. Forensics reveals the murder to be his work, but not his alone; desperate to fulfill his sick purpose, he has taken on an equally depraved partner.

Zoe’s own frustration grows after another woman turns up dead and drained—and another goes missing. Time is running out: Zoe knows her own death will be the climax of Glover’s sinister play, which has been unfolding for twenty years. To stop Glover and his vile partner, she’ll need to plunge deep into their motives; but this means drawing ever closer to becoming another casualty of a dark, dark thirst.

This is the third book in the Zoe Bentley Mystery series by Mike Omer.

I know this is supposed to be a police procedural type of book but it felt more like the main character was the villain and we watched behind the scenes as Zoe and Tatum inched up on finding him. This featured a murderer who liked blood and thought it could heal him.

On some levels this was disturbing. The character base in an Omer book is always intense and interesting. I thought the whodunit/mystery was nice. And it was connected to previous books; so the thread of the plotline was intact from book to book.

A great read but I couldn’t completely concentrate on it due to a personal tragedy in my own life. If you like this type of book and want to read a good detective mystery/police procedural, definitely check this one out. You won’t be disappointed.