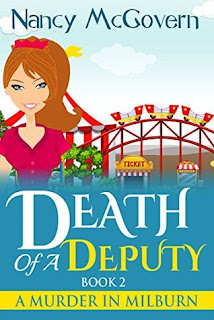 Her best friend and business partner, Raquel, has just been murdered. The one man she had thought she loved can now be seen moseying through town with a supermodel dangling off his arm. And the diner she and Raquel had planned on opening together may never feed its first customer.

At least she still has her friend, the town Sheriff, Sean...

So, when the Sheriff's deputy is killed at the town's annual Viking festival and everyone suspects Sean of murder, Nora realizes she must step in and prove him innocent. After all, she can't handle losing him, too!

This is the second book in the Murder in Milburn series by Nancy McGovern.

Between this book and the first book Nora and Harvey broke up. And Nora hung around Sean. Then he gets framed for murder and loses his job. The murdered deputy was in debt up to his eyeballs and his his wife was in love with Sean! So that gives Sean motive for the murder.

This book was just as intense as book one. I am not always a fan of how Nora acts. We have yet to see her open her diner even when she is offered money from two of her friends. It becomes a sticking point between her and Harvey. He wonders if she even wants to see this dream come to life at all.

This is definitely a book with many angles.

If you love a good cozy mystery, check this one out. What a fun read!
Posted by Toni at 10:01 AM