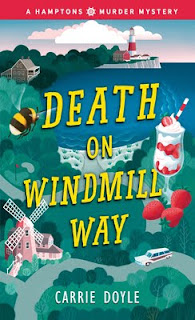 Cozy mystery fans and lovers of Louise Penny, Agatha Christie and Alexander McCall Smith should prepare a hearty snack and snuggle in for this compelling page-turner by best-selling author Carrie Doyle. Mouth-watering food descriptions, nail-biting scenes of suspense, a winning heroine, and a captivating cast of characters pack the launch of this series, one that's sure to entertain readers for years to come.

The Hamptons are known for beautiful beaches, luxurious living, millionaire mansions, and now...murder! Antonia Bingham, a renowned chef and the new owner of East Hampton's Windmill Inn, escaped to the Hamptons to get away from a harrowing past. Yet now she finds herself in more danger than ever when she discovers the inn's previous owners may have been the victims of murder. Will her overly inquisitive personality be her downfall as she digs up secrets in her attempt to solve the crime?

The Hamptons are known for beautiful beaches, luxurious living, millionaire mansions, and now...murder!

This is the first book in the Hamptons Murder Mysteries series by Carrie Doyle.

After the sudden death of her father and a messy divorce, Antonia Bingham moved to the other side of the country and opened an Inn in the Hamptons. She is a bit oblivious to how much it costs to run an inn and also have a restaurant too. She is leaching money like crazy. Her book keeper asks her to find ways to cut back but she is a bit bull headed  about it. I think she has a bit of blinders on.

Not long after arriving, she learns that a lot of the Windmill Inn owners have died mysterious deaths. She splits her time between being the head chef, running the inn and solving the mystery. This story had a bit of a cold case feeling to it since the murder didn’t happen recently.

I can see that the author is still building her world since some of the characters had no real part to play in the actual mystery element of the book. I thought adding movie star Nick Darrow was a nice touch and I look forward to seeing how the author plans to use him in the future.

Overall, it was a pretty good book. I enjoyed myself and found the mystery interesting and fulfilling.

If you love a good cozy mystery, definitely check this one out. What a fun read!

I received this as an ARC (Advanced Reader Copy) in return for an honest review. I thank NetGalley, the publisher and the author for allowing me to read this title.
Posted by Toni at 1:09 PM