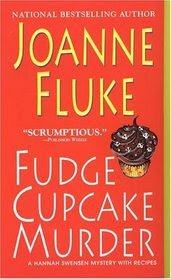 Goodreads synopsis:
Bakery owner Hannah Swensen just can't keep her hands out of the batter when murder stirs things up in Lake Eden, Minnesota, leaving the sheriff dead, an innocent deputy accused, and a killer still on the loose...

For Hannah, life seems to be lacking a certain flavor. It's not that she doesn't enjoy teaching a weekly "Potluck Cooking Class" at the community outreach center. Or that she's not excited about her sister Andrea's bun in the oven -- watching the very pregnant Andrea try to sit on a stool at The Cookie Jar is worth it every time.

Maybe it's this year's sheriff's election that's got her down. For years, Sheriff Grant's been the iron hand in town. But now, Hannah's brother-in-law Bill is giving the old blowhard the fight of his long, dubious career -- and Grant's not taking it in stride, especially once the local polls (and The Cookie Jar gossip) show Bill pulling ahead.

But before anyone can get a taste of victory, things go sour. Just as Hannah's emptying the trash, she makes a very unappetizing discovery: Sheriff Grant's body in the dumpster behind the high school where she's teaching her cooking class. And if that weren't bad enough, the poor man still has fudge frosting on his shirt from the cupcake she gave him earlier. She'd been trying to find the secret ingredient left out of the recipe. Now she has a more important mystery to crack.

The number one suspect is none other than Bill. In fact, he's the only suspect. But Hannah's not swallowing it. Plenty of people had reason to hate Sheriff Grant, starting with all the deputies whose cases he stole during election years just so he could take the glory. Soon, Hannah's dishing up scandalous secrets, steaming hot betrayals, and enough nastiness to keep the gossip mill at The Cookie Jar going through several pots of decaf. And the closer Hannah gets to the truth, the closer she gets to smoking out a murderer with a very nasty recipe for silencing people. Will Hannah be able to stand the heat when someone wants her out of the kitchen... for good?

This is the fifth book in the Hannah Swensen mystery series by Joanne Fluke.

Hannah does it again and finds the sheriff’s body in a dumpster. This isn’t good for Bill since he is running against the sheriff for his office seat. Mike puts Bill on leave and Hannah is outraged! Doesn’t he believe in his friend’s innocence?

There was a bit of distance put between Mike and Hannah in this book. Not only was she angry about putting Bill on the spot for the murder but for being blinded by the Shawna character too. I think the guys in this series get a lot of blame for either being a player or just not exciting enough but Hannah does bear some responsibility too. She needs to decide what she wants for one thing. Does she want to focus on Norman or Mike? Try them out. Do the relationship thing. Then if it doesn’t work out, try again. With the case about Shawna, I wish Hannah had really had a talk with Mike and expressed all her fears, feelings and reservations about how things were looking between the two of them. Mike is a smart guy and I think he would understand. Mike gets painted a lot as the jock or the airhead guy which isn’t always the case, in my opinion.

I have always been Team Norman. And I think Hannah would make a happy life with him if she allowed herself the luxury. She still has a lot of personal inner issues to work through and until she sees herself through the lens of how others see her and how she has all these wonderful assets and abilities, she may never find true happiness.

The mystery whodunit was great as always. I enjoy watching Hannah and her sisters ferret out the killer. Fluke knows how to pull out all the stops to keep us interested and engaged.

The ending seemed a bit rushed to me. We didn't get the normal wrap up where Hannah gets to revel in the fact she solved the case and tell everyone else about it. I still love this series and I am sure that fact will never change. My guilty pleasure series, for sure!

If you love a good cozy mystery, definitely check this one out. What a fun read!
Posted by Toni at 7:49 AM