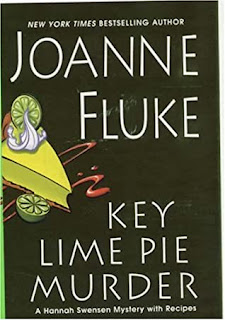 When one of her fellow judges, home economics teacher Willa Sunquist, is murdered, Hannah determines to sniff out the killer. Was it a man from Willa's mysterious past? Or a student she flunked?

Fluke has developed a charming supporting cast — Hannah's besotted (and slightly spineless) two suitors, her overbearing but likable mother, her endearing sisters and her levelheaded business partner all feel like friends by the time the murder is solved.

The dozens of tempting recipes Fluke includes are an added treat.

This is the ninth book in the Hannah Swensen series by Joanne Fluke.

Hannah has been chosen to judge a baking contest at the Tri-County Fair when she discovers the dead body of one of the other judges.

Norman gets Hannah a new phone to bring her into the 21st Century and then he helps her with the mystery of why her cat won’t eat. Hannah’s sisters are both vying for awards in different categories: Michelle in a Tri-County Pageant and Andrea in a mother daughter look alike contest.

There was a lot going on in the community aspect of this story. A caravan came into town to run this fair and it featured greatly in the mystery bringing with it a lot of new suspects.

I love how Hannah always keeps her trusty steno pad just in case she needs to take notes on a suddenly appearing murder investigation. I know that is unrealistic but this is a book and anything is possible in worlds like this. It is sort of how cozy mysteries work. These characters find an inordinate amount of dead bodies in a small town that really isn’t too likely in real life. Thank goodness. Can you imagine stumbling over a dead body every month or so?

I like how the story wrapped up and it took Hannah (and us) by surprise and had her on a mad chase around the fairgrounds. Classic. Definitely a fun read.

I still love this series and I am sure that fact will never change. My guilty pleasure series, for sure!
Posted by Toni at 12:44 PM