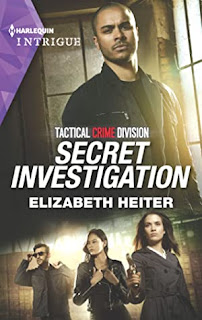 Goodreads synopsis:
In the wake of a tragedy,

the Tactical Crime Division is the first call.

When ironclad body armor inexplicably fails and soldiers perish, the Tactical Crime Division jumps into action. Agent and former ranger Davis Rogers asks to go undercover to find the traitor responsible for the death of one of his friends, and Petrov Armor CEO Leila Petrov is happy to provide access to her company…especially once she discovers she’s being framed. But will their joint efforts be enough to uncover the truth?

This is the second book in the Tactical Crime Division series in the Harlequin Intrigue line over at Harlequin Books.

Basic premise: Davis Rogers goes under cover at Petrov Armor, the maker of bullet proof vests that got some of their agents killed. The CEO. Leila Petrov, is new and taken over after the death of her father. Davis is part of the Tactical Crime Division. There are a couple of other agents involved in this story, Kane and Melinda.

I thought this was a good mix of suspense and romance. But the romance was pretty lacking from what you normally see in an intrigue. I personally would have liked to see more but what was shown was perfectly acceptable.

There were a lot of suspects and truthfully, I think I would have liked to see how Davis and his team gathered their information. A lot of the action seemed to happen off camera.

If you love a good romantic suspense, definitely check this one out.
Posted by Toni at 1:48 PM