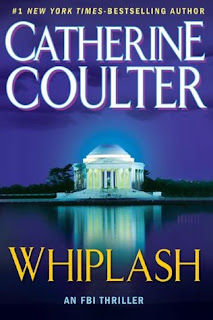 Pulaski uncovers a bombshell – Schiffer Engel’s intentional shortage is bringing in a windfall profit in excess of two billion dollars.

When a top Schiffer Engel employee shows up viciously murdered behind the U.S. headquarters, Sherlock and Savich are called in to lend a hand. The murder of a foreign national on federal land can only mean the German drug company has a secret of epic proportions.

This book was just okay for me. I thought it was a bit overly complex. I didn't really feel the connection between Savich and Sherlock like I have in other books. It felt really cold in that effect. Plus the whole story started off as if another character was the main POV and I think that threw me off as well.

Not a fan of this book. But I love Catherine Coulter's writing and I will definitely pick up other books in this series. Not every book is going to hit it out of the park for someone. It was probably just the wrong time in my life to read this. I needed more fluff and less of the intense espionage FBI stuff.

But don't take my word for it. I am reading a used hardback that has written on the inside cover "great read." Check this book out and decide for yourself.
Posted by Toni at 8:26 AM