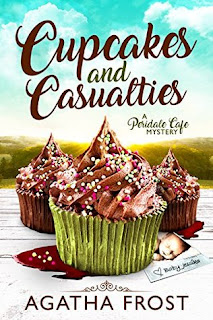 Goodreads synopsis:
The residents of Peridale don't like change, so when the famous actress, Candy Bennett, rolls into the village to demolish a historic cottage, things don't go as smoothly as she would have hoped. With the 'Peridale Preservation Society' protesting her plans to build a modern home on the land, things quickly turn sour. Days into the project, Candy's lead builder, Shane, is murdered and the task to solve the mystery once again falls into Julia's lap.

Did one of the protestors kill the builder to make a statement, or was he murdered by someone from within his own team? With the preservation society, the actress, the architect, and the builders all keeping secrets, Julia soon has her hand's full gathering evidence, but it's a familiar-looking new arrival in the village that commands her attention.

Julia's life is torn apart when she learns of the stranger's true identity, but will she be able to focus on the challenging case before another body turns up? The only certainty is that Julia's life will never be the same again.

This is the eleventh book in the Peridale Cafe mystery series by Agatha Frost.

A new Hollywood starlet is in town and has bought Barker’s old flat to remodel into a big mansion. One of the builders that have come in to bring this starlet’s vision to life is found dead.

As a secondary storyline, we are introduced to a new recurring character that will show up in other books. I don’t want to give too much away but I was happy to see this character open up and reveal his secrets.

If you love a good cozy mystery, check this one out. What a fun read!
Posted by Toni at 9:33 AM