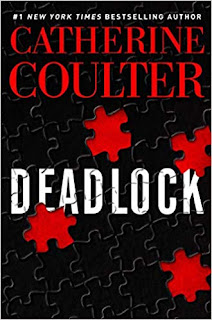 A young wife is forced to confront a decades-old deadly secret when a medium connects her to her dead grandfather.

A vicious psychopath wants ultimate revenge against Savich, but first, she wants to destroy what he loves most—his family.

A series of three red boxes are delivered personally to Savich at the Hoover Building, each one containing puzzle pieces of a town only FBI agent Pippa Cinelli recognizes. Savich sends in Cinelli to investigate undercover but someone knows who she is.

Savich and Sherlock are up to their eyebrows in danger, but can they figure out the red box puzzle and the young wife’s secret before it’s too late?

This is the twenty-fourth book in the FBI Thriller series by Catherine Coulter.

Originally, I thought this was more of a Sherlock series. But as I have read more and more books in this series, I realize it is really focused more on Savich. And I really like that idea.

Coulter’s stories always seem to focus in first on the characters that come in for this specific plot and whodunit. That seems to throw me a bit but I am getting used to it. A young wife whose grandfather was a politician and who is married to a politician is lured to a medium who tries to extract information from her. When she doesn’t fall for the ploy, they try to deal with her in a different way. This is where Savich steps in and saves the day when she is about to be kidnapped from her home.

I thought this plot was great and I was really invested in knowing what was going on. Loved the addition of Pippa. She really kept the plot moving. This story really used the FBI guys and we got to see a lot more of what they were all about. So happy to see that aspect.

Just a great all around awesome piecer of detective fiction. I totally recommend this.

If you want to read a good mystery, police procedural, or detective fiction, definitely check this one out. You won’t be disappointed.

I received this as an ARC (Advanced Reader Copy) in return for an honest review. I thank NetGalley, the publisher and the author for allowing me to read this title.
Posted by Toni at 8:25 AM