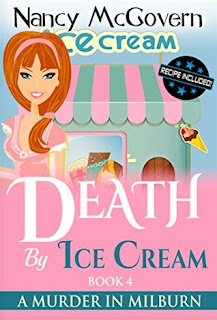 Goodreads synopsis:
Nora Newberry is back with another intriguing mystery...

When a man confronts his ex-wife in Nora's newly-opened Madness Diner, Nora immediately comes to the woman's defense.  Thankfully, after striking Nora and pulling a gun, the man is eventually apprehended and hauled off to jail.  Once again, all is peaceful at the diner...until that night, when the news is received that the man has escaped!

Later, when the man's ex-wife is found murdered at the local ice-cream factory, no one doubts he is to blame.  That is, until Nora's beau, Harvey, is arrested for the crime.  It's no secret that Harvey and Sheriff Sean do not like each other and Nora is convinced that this bad blood has tainted the sheriff's viewpoint of the case.  But when Nora springs into action in an attempt to clear her man's name, it seems that every new piece of evidence she finds supports the theory that Harvey is to blame!

Can Nora prove Harvey's innocence?  Is he innocent?  And, either way, will Sheriff Sean finally be able to put his nemesis away...for good???

This is the fourth book in the Murder in Milburn series by Nancy McGovern.

Nora finally opens her diner with her friend, Tina. Thank goodness. That has been a long time coming… since book one.

This story is a bit convoluted but all the pieces are there to make a good read. I enjoyed the whole ice cream company dynamic and  the new characters that were added or expanded upon. We got to see the mayor in a whole new light here which was nice.

The Sean and Harvey feud is still going strong and Harvey even gets put in jail as the primary suspect. Sometimes the disagreements between these two can be just too much for me. I wish the author would find a different way to bring tension to the story. I just feel sad that everyone is so angry all the time.

I will continue on but there are days when this story can trigger me when I am not in the most positive of moods.

If you love a good cozy mystery, check this one out. What a fun read!
Posted by Toni at 8:55 AM