Death Under the Fireworks (A Murder in Milburn #3.5) by Nancy McGovern 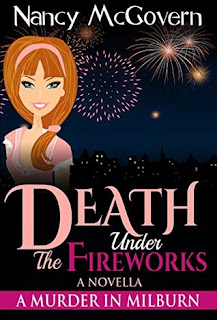 Death Under the Fireworks
(A Murder in Milburn #3.5)
by Nancy McGovern

Goodreads synopsis:
Nora Newberry could use a weekend getaway. She feels trapped & alone in her small town of Milburn, Wyoming, and she just wants a break for a little while. So when she receives an invitation to visit an old friend for the 4th of July weekend, she jumps at the opportunity!

Nora met Katya when she worked as a chef in New York City. It's been years since they've seen each other and it would be wonderful to catch up. And to do so on a private island in Portland, Oregon (who knew they had private islands in Portland, Oregon?!) seems like a dream come true! Especially considering that Katya's in-laws-to-be, the owners of the island estate, have offered to pay Nora to cook a few meals while she's there!

It can't get better than a paid vacation with an old friend! So, without much need for consideration, Nora packs her things and heads off for a weekend in paradise!

Unfortunately, her dream weekend turns into a nightmare when her host dies at the dinner table. And, as if that's not bad enough, it appears as if it was something in a dish Nora prepared that did him in...

This is the first novella (3.5) in the Murder in Milburn series by Nancy McGovern.

Nora is asked to cook for an old friend who is getting married and she jumps at the chance from some time away from Milburn. When their host is killed, anyone in the family is fair game considering how controlling the man was. Everyone has a motive in this one… even Nora! Looks like her food caused the man to croak.

It was nice to see Nora in a different environment with a new set of friends. The story is too short to dig into anything with much depth but this book seems to have more meat in it than her normal length books. Could have probably been a full sized story if she had wanted to take advantage of all the storyline material.

If you love a good cozy mystery, check this one out. What a fun read!
Posted by Toni at 8:47 AM