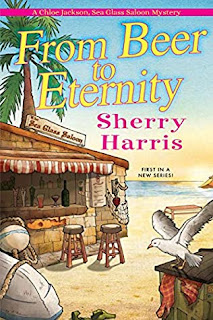 Goodreads synopsis:
A whip smart librarian’s fresh start comes with a tart twist in this perfect cocktail of murder and mystery—with a romance chaser.
MURDER ON TAP

With Chicago winters in the rearview mirror, Chloe Jackson is making good on a promise: help her late friend’s grandmother run the Sea Glass Saloon in the Florida Panhandle. To Chloe’s surprise, feisty Vivi Slidell isn’t the frail retiree Chloe expects. Nor is Emerald Cove. It’s less a sleepy fishing village than a panhandle hotspot overrun with land developers and tourists. But it’s a Sea Glass regular who’s mysteriously crossed the cranky Vivi. When their bitter argument comes to a head and he’s found dead behind the bar, guess who’s the number one suspect?

In trying to clear Vivi’s name, Chloe discovers the old woman isn’t the only one in Emerald Cove with secrets. Under the laidback attitude, sparkling white beaches, and small town ways something terrible is brewing. And the sure way a killer can keep those secrets bottled up is to finish off one murder with a double shot: aimed at Chloe and Vivi.

This is the first book in a new series called Chloe Jackson Sea Glass Saloon mystery, by Sherry Harris.

Chloe comes to Florida due to a promise she made to her best friend, Boone. She wants to make sure his grandmother’s business is up and thriving before she goes back to her Chicago home. Viv, however, isn’t really interested in Chloe’s help but allows her to stay on and assist the staff while she is in town. When a land developer is found dead behind the bar, Viv becomes suspect number one and this makes Chloe not want to leave town until this whole matter is straightened out.

This book really keeps you interested and there is no lag time to make you want to put it down. This was a great read. I completely enjoyed this setting and cast and am prepared to go the long haul with this series.  I already can’t wait for the next book in the series.

I keep hoping for a classic soap opera move and at some point discover that Boone isn’t really dead after all. This missed relationship really makes me sad for the character. Definitely a series to watch!

If you want to read a good cozy mystery, definitely check this one out. You won’t be disappointed.

I received this as an ARC (Advanced Reader Copy) in return for an honest review. I thank NetGalley, the publisher and the author for allowing me to read this title.
Posted by Toni at 7:15 AM