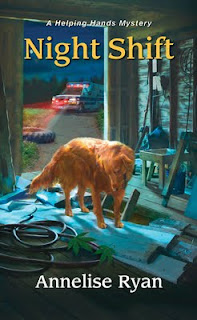 Goodreads synopsis:
When social worker Hildy Schneider commits to an after-hours side job, she finds herself drawn into the darker side of small-town Sorenson, Wisconsin—and the twisted mind of an unnamed killer . . .

Strange things have been happening since Hildy started moonlighting with local police, but a desperate late-night call involving a former patient from Sorenson General Hospital tops the list. Although Danny Hildebrand has been tormented by hallucinations for years, he swears he’s being haunted for real by the victim of a grisly murder . . .

The rambling ghost story seems like another delusion. But after a body turns up in a neglected farmhouse crawling with secrets, Hildy and the magnetic Detective Bob Richmond rush to explain Danny’s knowledge of the incident. As the crime-solving partners unwittingly grow closer while examining a series of eerie leads, they realize that surviving past sunrise means shedding light on a criminal willing to do whatever it takes to stay in the shadows . .

This is the second book in the A Helping Hands mystery by Annelise Ryan.

I was quite captured by this book. Hildy had a job where she worked at the hospital as a social worker for a bit during the day and then worked with the police during the dead of the night.

Her friend’s brother who has mental problems is admitted to the ER in order to balance out his medications and he tells them about a murder that they think is all in his head. Then later, they come across a scene eerily similar to what he claimed he saw all the way down to the purple dinosaur.

Definitely an interesting read that I found engaging and interesting. I definitely want to keep following this author and maybe even pick up the first book in this series just to give myself a bit of back story.

If you want to read a good cozy mystery, definitely check this one out. You won’t be disappointed.

I received this as an ARC (Advanced Reader Copy) in return for an honest review. I thank NetGalley, the publisher and the author for allowing me to read this title.
Posted by Toni at 7:24 AM