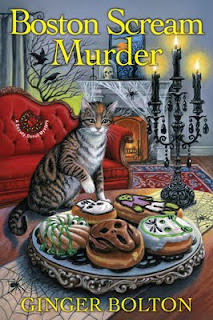 Goodreads synopsis:
Halloween in the small town of Fallowbrook, Wisconsin, is the perfect season for Deputy Donut Café owner Emily Westhill to unmask a killer.

October 31st is just around the corner and Emily Westhill's Boston cream donuts, carved with a scream, have made an indelible impression on local eccentric Rich Royalson. So much so that he's ordered three dozen, with twice the fudge icing, for his 70th birthday--a special event in more ways than one. It's to be held on fog-shrouded Lake Fleekom where, twenty years ago, his wife mysteriously drowned.

But the next day, when Emily arrives with her scrumptious screamers, she stumbles upon Rich's corpse. The poor guy wanted a unique birthday bash--just not one to the side of his skull. With a guest list of possible perpetrators, and his last will and testament suspiciously left at the scene, Emily soon discovers that the Royalson closet is rattling with skeletons. As the fog thickens, motives mount, and the tricks outnumber the treats, Emily fears that Rich may not be the last one in Fallowbrook to go out screaming.

This is the fourth book in the Deputy Donut mystery series by Ginger Bolton.

It was really fun getting back into this series again. I love it when I can recall so many of the characters from a previous book. I really seem to resonate with this series and its people. So much fun to be had here.

The Deputy Donut gang is making Halloween faces on their donuts, witches, zombies and a screaming looking Boston Cream donut. One of the locals, an older gent, has a date with a local gal he met on a dating site and he is very specific about what he wants served to them. No scream faces, please. His date goes well but later in the day, he is reconnected with his true love and then days later is found dead just as he has signed his will over to this newfound love interest.

This was a pretty complex mystery and I love it when authors can figure out this stuff and make it seem so effortless. I think I still need to read books one and two in this series and I am going to get on that ASAP! Definitely a series you should put on your must read list!

I received this as an ARC (Advanced Reader Copy) in return for an honest review. I thank NetGalley, the publisher and the author for allowing me to read this title.
Posted by Toni at 7:55 AM