Eat, Drink and Be Wary (A Cook-Off Mystery #4) by Devon Delaney 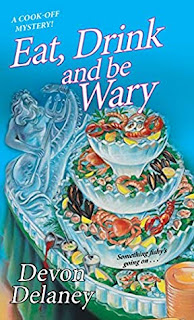 Eat, Drink and Be Wary
(A Cook-Off Mystery #4)
by Devon Delaney

Goodreads synopsis:
The New England Fall Food Fest has begun, and for competitive cook Sherry Oliveri, it’s a chance to take home a prize—and take down a killer . . .

Sherry’s hoping her Savory Shrimp Lettuce Cups will impress the judges, and she’s invited her brother, Pep, to serve as her sous-chef. The good news is that she takes first place in her category, the bad news is that it’s easier to win when your toughest competition is dead . . .

After contestant Fitz Frye is found with a fishhook in his neck, Pep’s strange behavior doesn’t help his case when the police consider him top suspect. While Pep sits through a shakedown, Sherry searches near and far for the real culprit—before another deadly course is served . . .

This is the fourth book in the A Cook-Off Mystery series by Devon Delaney.

This was a fun mystery to follow. I was fascinated by the cook-off concept. I guess Sherry is a home cook who doesn’t do cooking as a thing she does to get paid (aka her real job). I mean, she does get paid since she seems to win these things quite a lot. Her real job is in a store that sells rugs and items for rug hooking. I wonder why her store doesn’t branch out into more similar crafts like embroidery, cross stitch and the like.

The whole mystery centered around a contestant, who Sherry was familiar with, who ended up dead the day before the contest began. There were all sorts of suspects, a nosy freelance reporter who seemed to be stacking the deck in her favor trying to make her story more sensational and a spice market guy who also served subpoenas. I couldn’t decide who was the better suspect. These authors are so good at pulling the wool over our eyes that I never see the bad guy coming.

I really resonated with Detective Ray Bease in this one. He had such a hard time during the course of this case. His mother was taking a turn for the worse with her dementia and he was so distracted he was afraid that the younger guys on the force were going to take his job right out from under him. Loved how Sherry helped him in the end.

Overall just a great read. Highly recommended.  Loving this series so much!