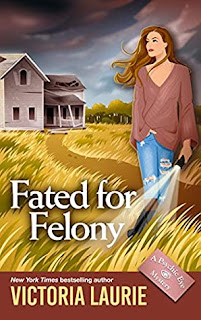 When three newbie agents at the Austin’s FBI cold-case bureau resent having to work alongside a psychic consultant, Abby Cooper finds herself in hot water after they contact super-popular podcaster Mike Toscano—a former agent and huge skeptic of Abby’s abilities.

To prove that she’s the real deal, Abby will have to solve Toscano’s oldest—and coldest—case, and she’ll have to do it on air with millions of Toscano’s fans critiquing her every move. To make matters worse, the D.C. brass is threatening to shut down the Austin offices if Abby doesn’t bring home a win.

But helping to solve the unsolvable is what Abby does best, and she’ll be bringing her A-game to Toscano’s podcast. The only trouble is the killer could be listening…

This is the sixteenth book in the Psychic Eye mystery series by Victoria Laurie.

There are some newbie agents at the FBI office where Abby works with hubby, Dutch. One of them has ousted her to a popular podcaster that has the ear of many of the FBI higher ups. This has put all of their jobs in jeopardy. Now she must perform on command in order to keep her job and those of her friends. But this podcaster, who is a retired Fed, is a hard egg to crack. And it may not even make a difference if she succeeds or not. It all just might be over and done with.

I wish I could give this one more than five stars. I mean, there is just so much meat in this story and it tugs at your heart strings while fulfilling that need for a whodunit mystery. Just a great read!

You just can’t put a book like this down. I had to read it straight through. So wonderful. Love this series. Highly recommended. Love both of her series and suggest them to everyone.

If you like cozy mysteries, you won’t be disappointed in this series. Take a deep dive into this fantastic series!
Posted by Toni at 1:49 PM