Her Shallow Grave (Detectives Kane and Alton #9) by D.K. Hood 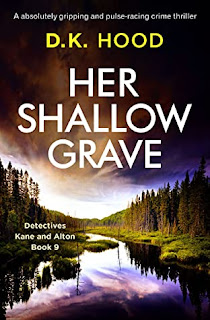 Her Shallow Grave
(Detectives Kane and Alton #9)
by D.K. Hood

Goodreads synopsis:
She runs her trembling fingers over the dark, damp walls surrounding her. Above her head, she hears heavy footsteps. She knows she has nowhere to hide and as the door to the cellar is flung open, she finally sees his face.

It’s winter in Black Rock Falls and, as tourists flock to the small town to take in the snowy mountain peaks, one visitor makes a sickening discovery. The frozen body of a young woman hangs from a tree on the outskirts of town. Detective Jenna Alton is called in to investigate.

Jenna’s stomach turns as she surveys the ice-cold remains, and she’s soon alerted to similar burial sites nearby. With no missing persons reported, Jenna and her deputy, David Kane, fear Black Rock Falls is being used as a dumping ground for bodies.

As the body count mounts up, Jenna is more determined than ever to find the person responsible. But as she tries to catch the killer out, he outsmarts her once again and Jenna begins to wonder if he knows her next move. Could he be closer to her than she thinks?

When the investigation takes Jenna to a homeless shelter right in the heart of the community, she fears for the life of a woman who hasn’t been seen for a few days. It’s clear the killer is beginning to escalate, so Jenna ramps up the investigation and puts herself in unthinkable danger. Can she catch the murderer off guard, or does he already know she’s on her way? Has Jenna finally met a killer she can’t catch?

This is the ninth book in the Detectives Kane and Alton series by D.K.. Hood.

When Jenna, Kane and Wolfe go on a ski weekend, they discover a dead body on the slopes nailed to a tree.  They have uncovered yet another serial killer in their neck of the woods.

This book was great. They didn’t just track the Sculptor/Preacher but there was a nasty gal who fixated on Kane and tried to kill Jenna. These stories just keep getting better and better. And I am hooked.

I think Jenna is finally coming around to the idea that she has feelings for Kane and it shows in this book a lot. In previous books, I kind of wondered about her relationship with Wolfe but here it seems to be clearly stated that they are just like brother and sister. Love the whole dynamic of this cast. It just keeps me coming back for more.

If you love a good police procedural, detective fiction or crime thriller, definitely check this one out.

I received this as an ARC (Advanced Reader Copy) in return for an honest review. I thank NetGalley, the publisher and the author for allowing me to read this title.
Posted by Toni at 8:09 AM