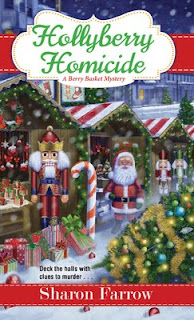 Goodreads synopsis:
A cold wind is blowing off Lake Michigan, and murder is scaring the dickens out of everyone . . .

Considering her name, Marlee Jacob is an obvious choice for the role of Jacob Marley in Oriole Point's production of A Christmas Carol. It's just sad that the role has opened up because of the death of the elderly actor who'd originally been cast.

But Marlee, the proprietor of The Berry Basket, will do her best to keep spirits high--that is, until clues start mounting that there's danger behind the scenes. There are accidents on set, the tree in the village square topples over, and worst of all, a body is found with a sprig of holly draped over it. If Marlee can't wrap up the case, she may not have a berry merry Christmas . . .

This is the fifth book in the A Berry Basket mystery series by Sharon Farrow.

Marlee and her best friend discover the local curmudgeon has died in what seems a natural death. She is already in full investigation mode even before she realizes that the cookies she picked up at the scene were poisoned making his death a homicide.

This was a pretty complex mystery. No one really liked this man but he seemed to be pulling the strings of everyone in town. So nearly everyone had a motive.

They pull Marlee into the production of A Christmas Carol  simply because she has a similar name as the character. I thought that was crazy. And the people were completely rude to her to top it off. She told them she would take over for the dead man and then they kept pressuring her to learn her lines. I would have just walked away.

I am glad Marlee persisted in chasing after this death. I am not sure it would have been solved otherwise.

Overall, it was an excellent read. Definitely recommend this series, for sure!