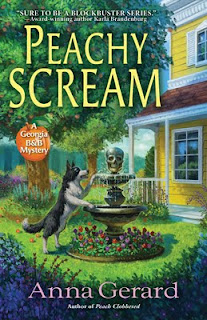 Goodreads synopsis:
To die, or not to die? Georgia B&B proprietor Nina Fleet turns amateur thespian to bring the curtain down on a Shakespearean actor's killer.

It's nothing short of inevitable that Cymbeline, GA, hosts an annual Shakespeare festival. But stage-struck Nina Fleet is about to learn that putting on an amateur theatrical production can be murder. Nina's anticipating showbiz glamour and glitz when a community Shakespearean troupe arrives for a two-week stay at her B&B. But the lights dim when she learns the company's director is her nemesis, struggling actor Harry Westcott--who still claims to be the rightful heir to Nina's elegant Queen Anne home.

Meanwhile, the troupe members are not content to leave the drama upon the stage. Accusations of infidelity and financial malfeasance make a shambles of rehearsals. And then, two days into the troupe's stay, the lead actor is found dead in Nina's formal Shakespeare garden. Natural causes...or murder most foul?

Nina uncovers evidence that something is indeed rotten in the town of Cymbeline. Too bad Harry is the only one who believes that she's not going completely off script. And exposing the truth isn't easy when the remaining troupe members say the show must go on...particularly when all of them seemingly had a motive for wanting their fellow actor to permanently exit stage right. Determined to keep the killer from making a curtain call, Nina and her trusty Australian Shepherd, Matilda, join forces with Harry to sleuth out the murder plot. Will they succeed before someone else shuffles off this mortal coil? Find out in Anna Gerard's delightful second Georgia B&B mystery.
***

This is the second book in the Georgia B&B mystery series by Anna Gerard.

I have been looking forward to this book ever since I finished reading the last one. And I was not disappointed.

Was there as much angst between Harry and Nina as before? Not really. But it is there.

Harry brings back his big bus with a troupe of actors for the Shakespeare Festival in Cymbeline. He books his troupe in Nina’s B&B and she is never the wiser that Harry is involved until he shows up with the gang. One of the troupe who has a penchant for asking for all sorts of favors ends up dead on her porch and Nina and Harry are once again pushed into a mystery they  are both involved in.

This book sort of gave me a bit of stress as the mystery washed out. I think that is the sign of a great writer. It gave me all the feels. Definitely a series and author I recommend. I am hooked on this series!

I received this as an ARC (Advanced Reader Copy) in return for an honest review. I thank NetGalley, the publisher and the author for allowing me to read this title.
Posted by Toni at 7:25 AM