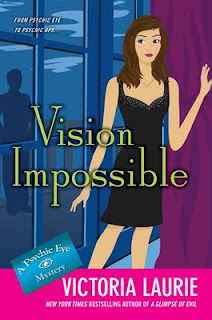 Goodreads synopsis:
Abigail Cooper makes a living as a psychic, using her vision to stop others from making a killing on murder. Now, as the FBI’s newest Civilian Profiler, she can add something else to her resume—spy.

FROM PSYCHIC EYE TO PSYCHIC SPY

The CIA and Air Force need Abby Cooper’s help. The military has developed a software surveillance system able to lock onto any individual’s unique aura. The problem is, the drone carrying the software has gone missing, and the implications to national security could be devastating.

To get the drone back, Uncle Sam must recruit a special agent—a very special agent in the form of professional psychic, Abigail Cooper. With her fiancé Dutch Rivers by her side, Abby is eager to do her patriotic duty and stop the criminals before they set their diabolical plan into motion. But the deeper Abby gets involved in counter intelligence, the more she makes herself a prime target…

This is the ninth book in the Psychic Eye mystery series by Victoria Laurie.

Abby is called in to help bring back the surveillance system that can see a specific person’s aura. It is kind of like a DNA fingerprint. No two auras are the same. Dutch goes in undercover with her along with an agent named Frost. Things go wrong almost from the time their airplane hits the tarmac.

This mystery is really good. All of the stories crafted by Victoria Laurie seem to be just stellar. I am so engrossed. In fact, the reason I am reading this book is that I just had to read another Laurie book after reading the last one on my TBR. They are just addicting.

You just can’t put a book like this down.I had to read it straight through. So wonderful. Love this series. Highly recommended. Love both of her series and suggest them to everyone.

If you like cozy mysteries, you won’t be disappointed in this series. Take a deep dive into this fantastic series!